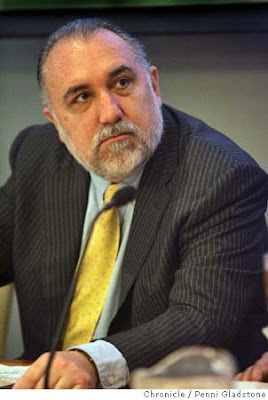 Whenever the mainstream media trots out the fictitious “generational shift” among Cuban Exiles to a softer stance against the Castro dictatorship, more often than not they cite polls conducted by the Miami polling firm of Sergio Bendixen. Although his polling on this issue (and practically all other issues) has been proven wrong numerous times, and his methodology has been shown to be dubious at best and downright fraudulent at worst, the media continues to quote his tainted results because it is exactly what they are looking for. The liberal media has a narrative they want to push, and Sergio Bendixen is one of those pollsters who appears to begin with the polling results he is looking for and then devises a methodology to achieve those results.

Over the years, Bendixen’s polling has amassed a history of  being consistently and repeatedly wrong. Going all the way back to when he confidently declared that Violeta Chamorro stood no chance of beating Daniel Ortega in Nicaragua (she won in a landslide), to more recent times when he announced his polling showed Joe Garcia the victor over Mario Diaz-Balart on election day only to watch FroJoe go down in bitter defeat at the voting booth. Sergio Bendixen has proven himself to not only be wrong on a consistent basis, but also arrogantly boastful about his unreliable polls until the very last moment. That is perhaps the reason we are not seeing as many Bendixen polls in the past few years. Bad polling is bad polling, and when your data is proven consistently wrong as that of Bendixen’s, it is hard to find clients willing to pay you for fraudulent and unreliable results.

Nevertheless, there are those who can use the services of a pollster like Sergio Bendixen, and apparently one of those is Dominican Republic presidential candidate Hipolito Mejia. While six presidential polls in that country conducted by reputable polling firms shows Mejia’s opponent, Danilo Medina, up by anywhere from 4 to 7 percentage points, Bendixen’s poll shows the exact opposite. He has Mejia up by six points: 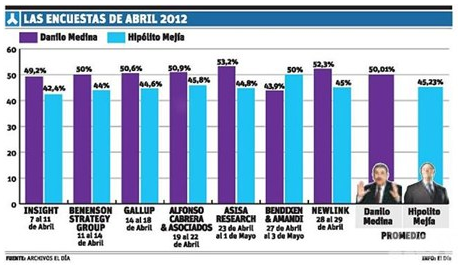 But not only is his poll the sole outlier, Bendixen is also arrogant about his questionable polling results. In press conferences given in the Dominican Republic, he not only defends his apocryphal polls, he calls into question the methodology and integrity of the other polling firms. Imagine that: the consistently wrong and spurious Sergio Bendixen questioning the integrity of reputable firms such as Gallup.

I guess that when you are already the world’s worst pollster, you really have nothing to lose.

3 thoughts on “Bendixen: World’s worst pollster has nothing to lose”