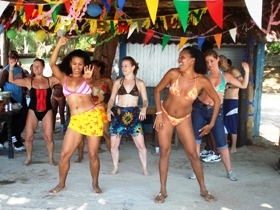 Ever since President Obama opened up American tourist travel to Cuba under the misnomer “people-to-people contacts,” it has been a virtual free for all devoid of any benefit to the Cuban people. Salsa dancing lessons, mojito tasting events, and propaganda laden Castro regime organized tours of State-run enterprises have made up the bulk of the “people-to-people” activities engaged in by American citizens vacationing on the island. To put it in Cubano terms, the entire policy is one huge relajo.

However, thanks to the pressure put on the U.S. government by elected officials such as Senator Marco Rubio, the U.S. Treasury Department has had to revise, clarify, and tighten the restrictions on American tourists visiting Cuba. In reality, the restrictions were always in place, only now the Treasury Dept. is threatening to actually enforce them.

Juan Tamayo in the Miami Herald:

The U.S. changes on some ‘people to people’ visits come after pressure from Florida Sen. Marco Rubio.

The U.S. Treasury Department has tightened a few of its restrictions on trips to Cuba by non-Cuban Americans on so-called “people to people” visits, saying that the revisions will “help to deter abuses.”

Complaints of abuses of such trips — they must be for “educational” purposes, never for tourism — have dogged the program since President Barack Obama approved it last year in a bid to increase Americans’ engagement with regular Cubans.

Sen. Marco Rubio, R-Fla., drew laughter during a speech in Washington last year when he read the schedule for one such trip, showing salsa dancing sessions every night. Other tours have met with Cuban government ministers and even a daughter of ruler Raúl Castro.

Rubio put a block on Roberta Jacobson’s nomination as the top U.S. diplomat for Latin American until the Obama administration addressed some of the myriad complaints. Jacobson was sworn in earlier this month.

“I think it’s progress … because the changes require closer reviews of the itineraries,” Rubio said. “But I still have concerns about the program in general, because it is difficult to manage and avoid abuses.”