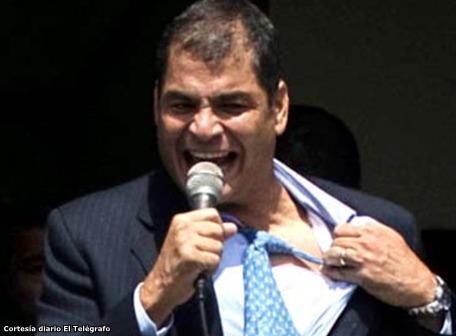 With Venezuelan dictator Hugo Chavez quickly reaching the end of his life on earth and the beginning of his afterlife in hell, someone has to take over as the leader and promoter of the main source of misery and slavery in Latin America: “21st Century Socialism.” That person appears to be Ecuador’s dictator, Rafael Correa, who is quickly rising to the top (or better said, plunging to the bottom) as the next South American dictator to take on the task of plunging Latin America into the darkness of communism.

Tehran, May 31, IRNA – President Rafael Correa of Ecuador urged Thursday the need to form a unified front against Imperialist powers to confront their political moves against independent nations.

President Correa made the remarks in a meeting in Quito, Ecuador, with visiting Vice-President of Iran for International Affairs Ali Saeedlou who arrived in the Latin American country to submit an invitation from President Mahmoud Ahmadinejad for his Ecuadoran counterpart to participate in a summit meeting of the Non-Aligend Movement’s member states to be held in Tehran in August.

Saeedlou arrived in Ecuador from Cuba on the second leg of his tour to a number of Latin American states.

Referring to the history of Iran-Ecuador relations, the Iranian official said the two capitals could promote bilateral economic ties as well as mutual cooperation in regional and international arenas.

He added Tehran-Quito increasing relations have indicated a deep friendly ties between the two nations.

Meanwhile, President Correa said, for his part, that Tehran and Quito could boost their political and economic ties due to the existing potentials in the two countries.