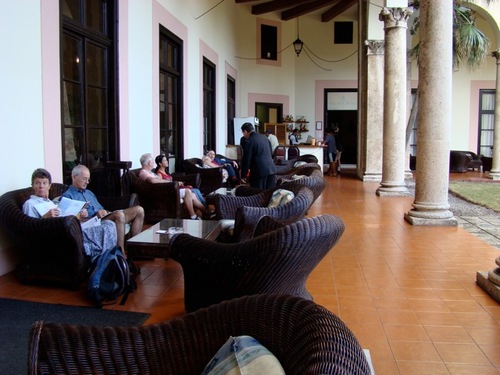 The cast bronze sculpture rests one arm on the bar. He looks ready to order another daiquiri, but in reality he’s observing, with his metal eyes, everyone who comes and goes from El Floridita. Some flash their cameras at that life-sized Hemingway statue, while others see it as something from the past, from that long-ago era when there was nothing unusual about finding an American drinking in some bar or walking along the crowded streets of Havana, a time when 90 miles didn’t seem a great distance, and the language barrier was surmounted by dint of drinks, music, hugs, and jokes.

Despite geographical proximity, for the vast majority of Americans today, Cuba is unfamiliar territory, a region deep in mystery. It so happens that many Americans can’t even locate our country on a map or imagine an island where one can see the entire periphery of its shores from the height of a coconut tree (something like the space inhabited by Robinson Crusoe, but in this case it is not occupied by one solitary man but by 11 million people). In that vast country to the north, there are still those who believe the story of the heroic David resisting the onslaught of Goliath in order to establish a kingdom of social justice, and others who see us more as a political monster where a people, deep in material and moral poverty and turned into robots, threaten to invade them, as soldiers as well as immigrants.

It’s already been half a century that American citizens have been denied the legal right to visit our country. While they have had to learn the names of 11 different leaders who have passed through the White House in those five decades, our Plaza of the Revolution has had only two tenants, both with the same surname. In all that time most of America’s enemies have evolved into business partners, like Russia, China, or Vietnam, or into NATO allies, like the various Eastern European nations. On the other hand, former friends have become adversaries, like Iran or Venezuela, but the name of Cuba (along with North Korea) remains on the same list.

So from the other side of the Straits of Florida, the image of Cubans has been shaped with a great deal of imagination, a lot of past memories, and the stories of the exiles. As a result, it is not strange to view us as if we were living in one of those old sepia postcards, forever frozen in an image from the mid-20th century. A people who still travel in old cars made by Cadillac, Chevrolet, and Plymouth, cars that came off the assembly lines of American factories. An Island trapped between the beauty of nature and the deterioration of its architecture, with neighborhoods that at times seem to be located in New York or Washington, D.C., while at others recalling Calcutta or Somalia.

To walk along the wide avenues of Havana is a trigger for nostalgia for Americans over 60. A kind of déja-vu, bringing back memories from childhood, sensations from their teenage years. We are something like a museum of the early 20th century, but one where those in charge of the “collection” haven’t taken care of the pieces they display to the public, an agglomeration of obsolete and patched objects that evoke a glamor now extinct.

It’s obvious that we are the only inhabitants of Latin America who do not call these visitors in pink-flowered shirts by the derogatory name “gringos.” Here, no. Here we say “yumas,” which has a laudatory and admiring tone, even a certain fascination. Although the political propaganda tries to get us to call them “yankees,” that little word has failed to permeate everyday language. And the same thing happens in the other direction. Many Americans look on us with the affection they would show to a younger and poorer cousin, one who still has a lot to learn. At times, with a certain arrogance, they ask questions only they understand: Why doesn’t my Blackberry work here? Where’s the machine to pay for parking? Is there somewhere I can buy Kleenex? And each one of these questions exudes an innocence that we find funny, that makes us laugh. Perhaps that is the source of their image of us as a people who are always smiling, which they then pass on to their friends in New Orleans, Arkansas, and Texas.

Among the Americans who have been treading this earth in the last five decades, there are many exceptional people, from academics to TV stars, movie directors like Steven Spielberg (why not travel to a Jurassic Park?), and ex-presidents like Jimmy Carter, all full of good will more than ingenuousness. Thousands of others come each year, daring to challenge the controls imposed by U.S. law, using the old trick of traveling through a third country and taking advantage of the customs authorities who do not stamp their passports so no one will find out they entered this demonized territory.

Among these intrepid visitors was Jaime, a boy from New York; not content with immersing himself in a passion for Cuban literature, he fell helplessly in love with a young brunette with almond eyes and the hands of a healer. One day, more than five years ago, someone asked him how, exactly, he saw Cuba. “My experience is unique,” he said, “so I can’t make generalizations. I am aware that I am on this Island when I open my eyes in the morning and the first question that comes to mind is: What will I find to eat today?”