Chipping at the foundations 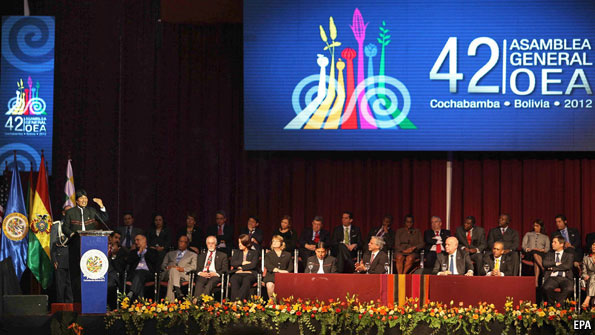 LIKE most clubs of governments, the Organisation of American States (OAS) is widely seen as little more than a debating society. It makes decisions by consensus, and cannot force its members to do anything against their will.

The tribunal’s prohibition on amnesties for the crimes of Latin America’s military dictatorships in the 1970s and 1980s has often been cited in court decisions overturning them. The commission was instrumental in cataloguing the wrongdoing of Alberto Fujimori, Peru’s president in the 1990s. More recently, Mexico and Chile announced they would begin trying soldiers accused of human-rights abuses in the civilian courts rather than military ones, following a ruling by the Inter-American Court. “Everything we have achieved on human-rights issues in the region in the last 30 years is in some way a result of the work of the IACHR,” says José Miguel Vivanco, the Americas director of Human Rights Watch, a pressure group.

However, human-rights monitors are seldom popular with the governments they criticise, and the more diligently they work, the more hackles they raise. In recent years the IACHR has trained much of its fire on the autocratic members of the Bolivarian Alliance for the Americas (ALBA), a mainly leftist group of countries led by Venezuela that includes Ecuador and Bolivia. To varying degrees, the courts in all those countries have come under the sway of the executive. Last year the commission won a ruling requiring Venezuela to end a ban on Leopoldo López, an opposition politician, from running for office. It also directed Rafael Correa, Ecuador’s president, to suspend a verdict that would have jailed the editors of a newspaper for libelling him. Mr Correa complied, but Hugo Chávez, his Venezuelan counterpart, did not.

ALBA is trying to rid itself of this nuisance. Mr Correa says the IACHR protects the media’s “freedom of extortion”, and Roy Chaderton, Venezuela’s ambassador to the OAS, calls it an “instrument of the empire [the United States] comprised of the complicit and the pusillanimous”.