Below is the testimony given by the Cuban peaceful human rights activist Jorge Luis Garcia Perez “Antúnez” before a U.S. Senate hearing last week, which ultimately led to his arrest by the Castro dictatorship and subsequent brutal beating (via Capitol Hill Cubans): 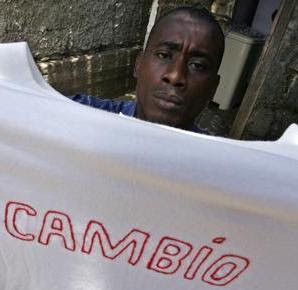 JORGE LUIS GARCIA PEREZ “ANTUNEZ”: Good afternoon, everybody. Good afternoon, Mrs. Jacobson, assistant secretary of state, Senator Menendez and everybody else present here. Very special greetings to my friend, Normando Hernandez Gonzalez, who is there with you.

It makes me very proud and excited to see Normando Hernandez Gonzalez there today because we shared political prisons. We both suffered beatings, oppression and hunger. He is like the best example of our homeland because he is a self-taught journalist that used to disseminate information in the prison. And I am very proud to see him represent us there today because he suffered all the oppression with a lot of dignity and decorum.

Something very important that my colleague Sarah Marta Fonseca just said was that we found out about this event with very short notice. And I think that shows the degree of oppression that we are under. And that speaks volumes of the repression that we feel. I had to, like she said, walk kilometers, hide behind trees and bushes, as if I was some kind of criminal, to attend an event that, in any other free and democratic country in the world, would be an everyday thing.

But thank God and thanks to the interests section for all the support given to us, we are here. It’s been hard, but we are here and we are involved. I want you to know that a few days ago, as a result of brutal repression in an act of repudiation, I witnessed the death of Antonia Rodríguez Mirabal in the city of Santa Clara where a group of pro-democratic, peaceful activists, myself included, were gathered to talk about liberty, freedom, justice and human rights.

But that’s not all, Mr. Senator. At this very moment, there’s a black woman that has been on hunger strike for several days in Santa Clara. And hear me out here: Ms. Damaris Moya Portieles is on a — thank you — is on a hunger strike because the political police threatened to sexually abuse and rape her six-year-old daughter.

And we’re not talking about the Cuba from before 1959 or any other country in Latin America or the South Africa of Botha. We’re talking about the Cuba of the 21st century when horrible killings happen, such as the ones of Mr. Zapata Tamayo, Wilmar Villar Mendoza, Juan Wilfredo Soto and abuela — which is grandmother — Antonia.

It has been proven that — and for this, I have my witnesses here, these Cubans that recently left the island, Mr. Normando Hernandez Gonzalez and my colleague here, Sarah Marta Fonseca — that these increases in trips both from North Americans to Cuba and Cubans themselves have not helped at all with the democratic process in our country because they come to our country on matters that have nothing to do with what we’re doing.

I would like to clarify that I fully respect President Barack Obama’s administration, and I know that everything that they are doing is with their best intentions. And both the Democratic and the Republican Parties are allied to our cause. But Mr. Senators, when the opposition is increasing, both in qualitative as well as in quantitative terms, when there is an increase in the number of protests all over the country, this is the time and these are the opportunities to support the resistance forces.

This is because the Cuban resistance forces are embarked on a head-on battle with the state. We suffer beatings. We suffer undue treatment — harassment even — in our own homes, torture and all kinds of violations of our human rights.

To conclude, because I have already said a lot and those who spoke before me have done so very eloquently — maybe even more so than me — like Jose Marti said, the truth is to be said, not to be hidden.

And I would like to ask: Could we, the opponents in Cuba, the leaders of different organizations and different initiatives, go to the United States and come to the island freely? Thank you very much.