An inspiring symbol of resistance in China:

Home Amid Chinese Highway a Symbol of Resistance 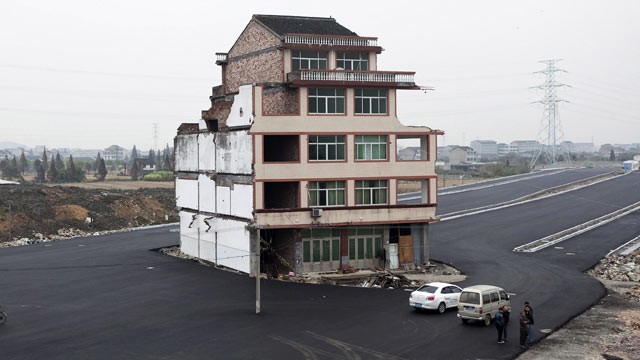 In the middle of an eastern Chinese city’s new main road, rising incongruously from a huge circle in the freshly laid pavement, is a five-story row house with ragged edges. This is the home of the duck farmer who said “no.”

Luo Baogen and his wife are the lone holdouts from a neighborhood that was demolished to make way for the main thoroughfare heading to a newly built railway station on the outskirts of the city of Wenling in Zhejiang province.

Dramatic images of Luo’s home have circulated widely online in China this week, becoming the latest symbol of resistance in the frequent standoffs between Chinese homeowners and local officials accused of offering too little compensation to vacate neighborhoods for major redevelopment projects.

There’s even a name for the buildings that remain standing as their owners resist development. They are called “nail houses” because the homeowners refuse to be hammered down.

2 thoughts on “A symbol of resistance in China”