For those who are still wondering why the Castro dictatorship in Cuba cut off two of their American business partners here in South Florida, Capitol Hill Cubans has the answer:

The news of the weekend has undoubtedly been the Castro regime’s suspension of the landing rights of two of the biggest providers of U.S-Cuba charter flights, Airline Brokers and C&T Charters.

According to Cafe Fuerte, which first broke the news, both providers were notified of their suspension by Havanatur Celimar, the Castro brother’s company in charge of the U.S. travel market.

All of these charters companies were set up — either directly or indirectly — by the Castro regime.

Airline Brokers is owned by Vivian Mannerud, who gained notoriety in the 1990’s for raising money for the Clinton-Gore campaign from drug smuggler Jorge Cabrera at the Copacabana Hotel in Havana.

In early January 1996, three weeks after having attended the Christmas reception at the White House, Cabrera was arrested and charged with importing 6,000 pounds of cocaine into the United States.

Meanwhile, C&T Charters is owned by John Henry Cabanas, a “former” Cuban intelligence official, who was quoted as saying, “I love Fidel like my father, and I believe he loves me like his son.”

There had been grumblings for years that some of their current business partners — and previous handlers — in Havana were upset that they were not appropriately “sharing the wealth” (particularly after the Obama Administration eased travel sanctions).

As a result, the Castro regime has shut them down.

And simultaneously, it is sending a message to the remaining six charter operators, its new favorites, who will now have an increase in revenues — “pay up or you will be shut down.” 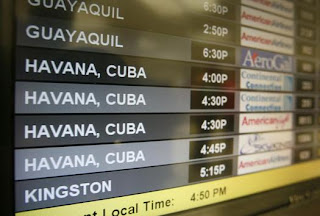 1 thought on “For the Castros in Cuba, it’s all about the Benjamins”