Amir Valle at The Children No One Wanted, the blog of imprisoned Cuban writer, Angel Santiesteban: 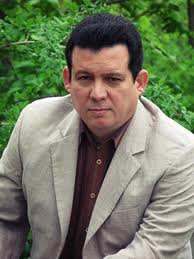 Ángel Santiesteban is a writer.

It’s a truth so absolute that it can make whoever reads this think, “Amir Valle still doesn’t know what he’s going to write.” And he would be right. Because I could have begun by saying directly what I mean:

Ángel Santiesteban is a writer, but they want to disguise him as a criminal.”

And now that’s very different. Still more if we see ourselves obliged to remember that Ángel Santiesteban lives in a country that spends its time “crowing” everywhere that Cubans “live in the best of worlds that exist today”; that is to say, almost in a paradise on earth, and that the accusations made by enemies — who in all cases are called “mercenaries of imperialism” — that human rights are not respected in Cuba are false.

Ángel Santiesteban is a writer, and he has told about a Cuba that the government doesn’t want to show; a Cuba that refuses to accept many honest beings of this world who once pinned their hopes on what the Cuban Revolution meant in those beautiful and, I repeat, encouraging, years of the Seventies. But the saddest thing is that Ángel Santiesteban has written, persists in writing and speaking about a Cuba that certain intellectuals of the Left strive to hide.

I have spoken with some of these colleagues, and it has called my attention to discovering that, determined in their personal war against “the evils of imperialism,” against “the genocide that capitalism is causing in the present world,” against the “dangerous and growing loss of liberties and human rights that the United States and the rich countries of the First World are carrying with them wherever they plant their boots,” they don’t want to understand (and even search for thousands of justifications, among others, Ahh! The North American blockade!) that on a more reduced but also criminal scale, the Cuban government has converted “Cuba, the beacon of the Americas and the world” into an absurd marabuzal (convoluted mess) of economic, social and moral evils.

They don’t want to recognize (and even try to find forced explanations) that because of the failed economic experiments and the “war mongering internationalism” of Fidel Castro and his minions, the Cuban people have suffered a true genocide that already numbers more dead than all the deaths that have occurred on the island since the beginning of the 20th century up to today (just trying to escape Cuba for the United States on makeshift rafts to reach “the capitalist hell,” around 30,000 Cubans have perished); and above all, those intellectual colleagues of the Left lose themselves in labyrinths of slogans from the epoch of the Cold War when they try to defend a government that shows its true dictatorial face eliminating freedoms and human rights for all its citizens, enraging itself especially with those who dare to think with their own minds, to say and write what they think.

It’s a shameful position, without doubt. But more shameful is the silence in response. And it’s in the face of evidence of the total disaster that today is the political and governmental “system” imposed on Cubans (and the quotation marks are because more than a system, it’s a desperate experiment to gain time in power to prepare the way for the “sons of the Castro Clan and their acolytes” to assume that power). Faced with the impossibility of defending such a debacle with solid arguments, they now count on changing the subject, and when they see themselves obliged “to fulfill their honorable professional careers” to face the stubborn truth of the facts, they respond with a theatrical “I didn’t know” (at least this happens with the majority of those I know).

1 thought on “For Shame! Cuba”