Primary School in Cuba: Crisis or Regression in Quality? 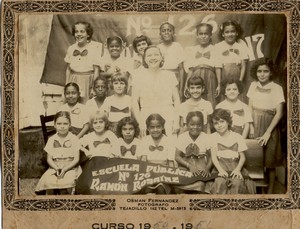 I have a nine-year old daughter, and due to the laxity in primary education, her mother and I have seen ourselves obliged to invest more time and money than we would like in order to strengthen her knowledge.

When she was in first grade, her teacher, 18-years-old with poor teacher training, used corporal punishment against the students every time she lost her patience.  The mistreatment happened often.  The girl was vulgar and angry.  Besides, she scarcely had any culture and little or no teaching vocation.

Repeated complaints to the director of the school and letters sent to the Minister of Education by some parents provoked a transfer of the teacher to another school.  The logical thing would have been to expel her from teaching.  But the lack of primary teachers in Cuba caused the educational authorities not to take drastic measures.

My daughter came home fearful because of the screams, blows and insults of her teacher.  She began to reject school.  She barely progressed in reading and math.  After her school day, her mother and I reviewed with her for two hours daily.

For 10 convertible pesos, half the salary of a professional in Cuba, we hired an experienced, retired primary school teacher for the purpose of elevating the quality of her instruction.  Also, we paid 3 convertible pesos monthly to an English teacher.

My daughter’s situation is not an exception in Cuba today.  I would say it is the norm.  Many families surely have a history of complaints to tell about faculty mismanagement.

According to the official press, there is a deficit of 14 thousand teachers in primary and secondary teaching.  Fernando Ravsberg, reporter for BBC on the island, says on his blog that it takes great ability to write an article of 1,400 words about the scarcity of teachers and not once mention the low salaries that they earn.

The regression in the quality of education is intimately tied to the ridiculous salaries.  A teacher does not earn more than 500 pesos.  He receives no extra money in currency.  And his social recognition has fallen precipitously.  When a young person chooses the teaching career, it is almost always because he has failed in his effort to pass entrance exams in other degrees considered more “prestigious.”

To be a teacher is the last card from the deck.  Many men opt to study in lightening teaching courses as a way of escaping military service.  It is not rare to see a former primary school teacher washing dishes in a luxury hotel or preparing homemade pizzas in a private business.

A good teacher is one of the most valuable contributions to the country that the GDP does not usually pick up.  Who does not remember superb classes in history or literature by a virtuoso teacher?  The good teachers are never forgotten and they are not only thanked for what we learned, but also for the way in which they taught us.  Behind great professional and honest men, there is always the hand of a great teacher.

At this point we are going backwards.  Right now, in the homeland of Felix Varela, Jose de la Luz y Caballero and Maria Luisa Dolz, among other outstanding educators, being a teacher is somewhat trivial.  An office of last resort to not swell the unemployment statistics.

If in Finland, a European nation in the vanguard of education in the world, they assign the highest level teachers to primary teaching, in Cuba the opposite happens.  The statistics reflect that on the island there are more than a million university graduates.  Thousands of technicians.  Zero illiterates.

It is laudable.  An achievement of Fidel Castro. With his stains: teaching is highly ideological.  And on the higher level, if you openly demonstrate your political discrepancies, they might throw you into the street.

In his timid and incomplete economic reforms, Raul Castro must have contemplated an important improvement in the salaries of primary and secondary teachers.  An official from the Ministry of the Interior or the Revolutionary Armed Forces earns a thousand pesos a month. They have a mobile telephone paid by the state.

They can get goods at cost in exclusive stores for officials.  And every year they go on vacation at military villas where they pay for their services with very little money.  The generals’ club enjoys greater prerogatives.  On the other hand, Cuban teachers earn miserable salaries, and their work is not recognized by the government.

Low quality education is now reaping its fruits.  Mediocre professionals, with spelling mistakes and incorrect use of language.  Youngsters without morals or civics whom school does not motivate.  The refrain, you can never know too much, fell into disuse.

The qualitative regression could be stopped if the State dignifies the teaching profession and its role in society.  To the contrary, the educational crisis will continue to become more acute.  We are going down that path.

Photo:  Year 1950-51. Third grade students in Public School No. 126 Ramon Rosainz, located at Monte and Pila, Havana.  They appear with their teacher, Miss Ines.  At that time, teachers were very valued and respected by society.  Before 1959, in public and private schools in Cuba, individual photographers made portraits similar to this one, which were sold to parents for 50 cents or a peso.  The first on foot on the second row, to the left, is Tania Quintero, my mother, then 8 years of age.

1 thought on “Primary School in Cuba: Crisis or Regression in Quality?”