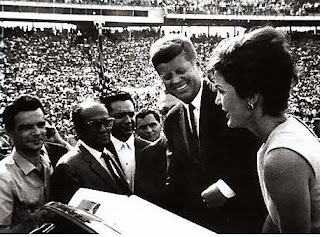 Today in Miami, surviving veterans of the Bay of Pigs invasion will commemorate the 50th anniversary of the return of POWs from the failed invasion. The military operation was doomed to failure by President John F. Kennedy when he, without shame or mercy, decided at the very last moment to withdraw the military support and reinforcements already positioned and expected by the freedom fighters, effectively abandoning the soldiers to die on the beach. Nevertheless, although outnumbered and deserted by the U.S. president, the courageous men of Brigada 2506 continued fighting until the very last bullet was shot.

Bay of Pigs veterans to be honored

MIAMI, Dec. 21 (UPI) — Miami is preparing to honor veterans of the 1961 Bay of Pigs invasion on the 50th anniversary of their release from Cuban prisons.

In the days before Christmas 1962, 1,113 U.S.-equipped fighters captured in a 1961 attempted invasion of Cuba by Fidel Castro’s forces, and imprisoned for 20 months, were released and given heroes’ welcomes when they returned to Miami.

The first planeload arrived at Homestead Air Force Base in Florida Dec. 23, 1962. They were greeted five days later by President John F. Kennedy at an event in Miami’s Orange Bowl, The Miami Herald said Friday.

The 50th anniversary will be observed Saturday by surviving members of the brigade, now in their 70s and 80s, with a Catholic Mass and a reunion at the Bay of Pigs Museum in Miami’s Little Havana section, the newspaper reported.

In 1962 the men were exchanged for $52 million in donated food and medicine in a swap handled by the American Red Cross to prevent the appearance of U.S. government involvement. Planes would arrive and unload in Cuba, and return with the troops.

“It was very emotional for me,” said Gloria Villa, then 20, who was recruited by the Red Cross to process the prisoners in Cuba because she was a bilingual U.S. citizen. “I knew many of the men from school and the entire experience was heartbreaking. Today I consider it the most important thing I ever did in my life.”