Benevolent Dictator is a classic oxymoron, unless, of course, you are a leftist and find yourself desperately attempting to justify and legitimize the brutal and murderous dictatorships of your personal heroes.

This is Not a Joke

It’s the latest public relations campaign by some of the world’s leading tyrants.

A mix between the old “benevolent dictator” bit and “anti-corruption crusader.”

The fact is none of these brutal tyrants are benevolent and they believe graft is their exclusive domain.

Xi learns from Castro and Putin in graft fight

Cuban president Raul Castro and Russian president Vladimir Putin may not have much in common, but Xi Jinping seems to take inspiration from them both.

This can be seen in the president-in-waiting’s effective measures to curb extravagance and over-the-top protocol customarily accorded to senior mainland officials.

The moves are part of Xi’s broad efforts to tackle corruption and restore confidence in the party.

Earlier this month, in the first Politburo meeting since he came to power as the party chief, the 20-odd Politburo members vowed to set an example by banning welcome banners, red carpets and floral arrangements.

They also simplified security details on their outings and inspection trips. The announcement has proved popular with mainlanders, who used to see the over-the-top protocol as a sign of extravagance and officials losing touch with the ordinary people.

Over the past few days, top military officials and the Beijing municipal government have released similar rules.

In a recent internal speech to explain the new working practices, Xi said he drew inspiration from his meetings with Raul Castro during his visit to Cuba in June last year, according to several people briefed about the speech.

During the visit, Xi was invited to a banquet at Raul Castro’s residence. But the Chinese side was told in advance that only six of them could go.

This perplexed the Chinese officials, who were accustomed to enjoying elaborate banquets as part of a big entourage.

When Xi arrived, he found that Raul’s residence was small and the dining room could accommodate only a small number of people.

He recalled that Raul showed him several small plots of land in his backyard where the Cuban president grew food for his family and gave what was left over to the ordinary people. That encounter appears to have left a deep impression on him.

In the same speech, Xi also cited the example of Putin, who has reportedly refused to divert traffic to make way for his motorcade around the Kremlin, one of the most notoriously congested areas in Russia. 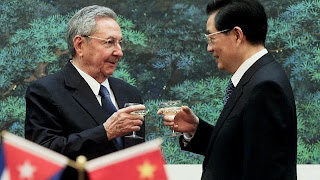