According to the Venezuelan dictatorship’s vice-presidential puppet, Nicolas Maduro, after surgery and treatment in Cuba courtesy of the Castro dictatorship, the almost dead, rotting from the inside out Hugo Chavez is “up and walking.”

Venezuelan VP confirms Hugo Chavez is ‘up and walking’ after surgery

Much mystery has surrounded Venezuelan President Hugo Chavez’s condition after his latest cancer surgery in Cuba on December 11.

According to a recent statement from the Venezuelan Vice President Nicolas Maduro reported by the Associated Press, however, Hugo Chavez is up and walking, and even doing some recovery exercises.

The statement is in fact the first time a government official has confirmed personally speaking with Chavez since his operation.

“He was in a good mood,” Maduro said in a 20-minute television segment. “He was walking, he was exercising. He wants to send a hug from the comandante to all the girls and boys in the country who will soon be receiving a visit from baby Jesus.”

“Up and walking,” they say… That conjures up some disturbing images, such as the one below: 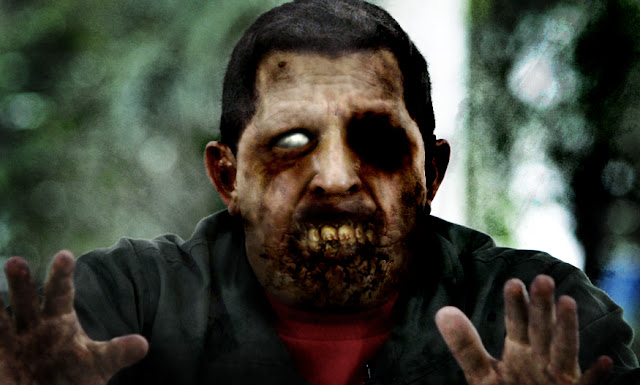