For those who continue to tell me the government of Hugo Chavez is not a dictatorship, tell that to the Venezuelans being targeted by the government’s political police for speaking freely.

Via the UK’s Guardian: 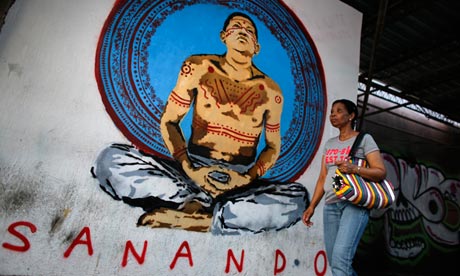 Venezuelan intelligence officers have raided the home of a Twitter user suspected of spreading destabilising rumours about the health of Hugo Chávez ahead of an inauguration that the ailing president looks increasingly unlikely to attend.

The alleged microblogger, Federico Medina Ravell is the cousin of a prominent opposition figure, prompting concerns that a long-simmering “information war” could be escalating as the government and its opponents try to fill the vacuum left by a leader who has not been seen or heard in public since he flew to Cuba for emergency cancer surgery a month ago.

Medina is the cousin of Alberto Federico Ravell, a well-known opposition journalist and co-founder of Globovision, a major news broadcaster and staunch critic of the Chávez government.

Medina, who was not at home, is accused of instigating terrorism through social networking sites. He is said to be behind the @LucioQuincioC Twitter account, which has claimed that Chávez will not return from Havana.

The account remains active and claims to be a collaboration between 20 bloggers in eight cities, mostly overseas. Other Twitter users are mocking Sebin by claiming to have spotted @LucioQuincioC elsewhere, including the peaks of the Andes and drinking cocoa in Calgary.

The raid underpins the heightened political sensitivity ahead of a scheduled swearing-in ceremony on Thursday that seems likely to be postponed amid uncertainty about both Chávez’s health and what happens when a president-elect cannot attend his inauguration.