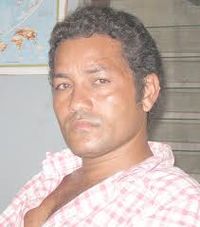 Cuban activist and independent journalist Raúl Parada Ramírez last month was sentenced to 6 months in jail after he refused to pay a 5,000-peso fine levied after he tried to illegally leave the country.

The absurdity of his predicament is evident on several levels. For instance, his anti-Castro activism — Parada is a member of the Frank Pais 30th of November Democratic Party — means Parada can’t get a job with which he might be able to raise the money to pay such an exhorbitant fine.

And then there is bizarre requirement that Cubans win the dictatorship’s permission before they can leave the island — a restriction that over the years has forced thousands of Cubans to risk their lives as they try to escape the Castro tyranny.

Parada is being held at the Valle Grande prison.

Another 30th of November party member, Boris Rodríguez Giménez, has been imprisoned on an idential charge for four months.

(Information about Parada was transmitted via Facebook by other members of the Frank Pais 30th of November Democratic Party, including party president Alfredo Fernández Silva.)