The Cuban Style of “Dumping” 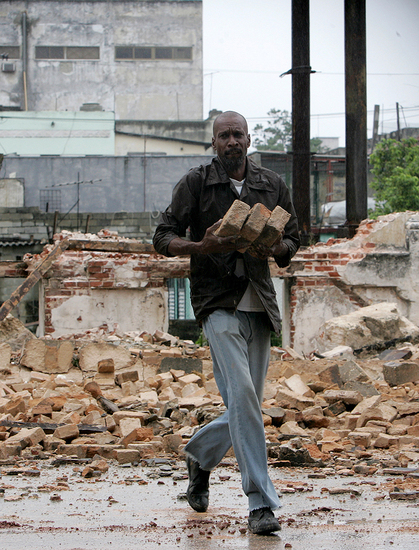 In the south of Havana, underneath a burning sun, half a dozen men are working in a precarious workshop making blocks using a machine made up out of odd bits and pieces. It’s hard work. For twelve hours a day they put in cement, stones and clay, filling up a mold which the Frankenstein machine then, with tired wheezing noises, coughs up again as blocks for use in construction. In a typical month they earn 1,600 pesos (64 cuc – Cuban Convertible Currency). Four times more than the average Cuban salary.

In theory, these precarious factories, put up in a hurry in a deserted recreation area or in the middle of a field, close by heavy industry, could be the key to increasing production of construction materials. For many families, it allows them to repair their dilapidated houses, especially now, following the passing of the devastating hurricane Sandy through Santiago de Cuba and other eastern provinces.

Alfredo’s target, working in the improvised workshop, is to produce 8,000 blocks a month. He usually manages that, working at half-speed, in the space of 10 days. The rest of the blocks he produces, between 750 and 900 a day, are carefully stored in an old state warehouse.

In accordance with the instructions of their senior manager, those blocks aren’t mentioned in the monthly report. They are for “under the counter” sales. If you add the more than 20,000 blocks which Alfredo’s workshop can produce — and there are hundreds of these little mobile establishments throughout the country — to the output of heavy industry, it is reasonable for people to ask themselves why then are the prices of bricks and building blocks so high.

Each one costs 10 pesos on the black market (0.5 cuc). Demand exceeds supply. And if you go to try to buy them in one of the state flea-markets, you never find any. Nevertheless, the yards of several stores are overflowing with cement, paving stones, aggregate, bricks and blocks.

According to an official of the Ministry of Internal Trade, managers in companies and stores collude in artificially maintaining the scarcity, in order to keep prices up. And that doesn’t only apply to construction materials.

Acopio, whose role is to acquire 80% of the harvests of co-operatives and individual farmers, has transformed itself into a stronghold of predatory corruption. Factories and branches of Internal Trade selling products for hard currency have set up a formidable mafia profiting from the prices of food products.

The regime is in the habit of favoring and turning a blind eye to this sort of activity. A can of beer, a soft drink, or a malt-whiskey, for example, including shipping and unloading, doesn’t cost more than 10 centavos in cuc. But then the foreign currency tax collectors see to it that the shops sell them with a 10-fold markup on the price.

The double currency has created a closed market in the national economy, above all in the companies which sell oil, mayonnaise, tomato paste, soap and detergent, which are among the most profitable, thanks to the elevated income from sales in convertible pesos

These mafia groups, which have taken hold in the local commercial and distribution channels, have amassed fortunes. Information is circulating in the internet about the case of the manager of a factory producing preserves, who has a cupboard full of dollars in his house. Nearly all the corrupt people are bureaucrats. With a red party card in their pocket. And when they speak, like robots, in everything they say they repeat two or more times the words Revolution, Fidel and Raul. An absolute bunch of opportunists.

They make up a compact group, with a monopolistic control over the prices of food, and essential items. Someone who used to work in a state-owned grocery store told me that in the month of April last year they received instructions from the provincial government to supply all the state outlets with black beans at the price of 8 pesos a pound.

Good news for the mafia rings. At that moment in the non-state farms, a pound of black beans cost between 15 and 18 pesos. The answer was to delay the distribution. By the back door, trucks full of beans started to deliver to private houses, which were converted into temporary stores. Then later, the beans went out again from these houses to supply the private farmers’ markets.

They sold the beans wholesale to private sector agents for 12 pesos a pound. And with the profit, 4 pesos a pound, they oiled the wheels of corruption: truck drivers, stevedores and senior managers. In this way they sold tons of black beans. And in official reports it was recorded that a pound of beans was selling for 8 pesos — which it never was.

Apples are another good example. In the hard currency shops, they cost between 35 and 45 cuc centavos each, according to size and quality. Right now you can go around the shops and cafes in Havana and you won’t find any apples for sale. Nevertheless all over town hundreds of people pushing barrows are offering apples at 15 to 20 pesos each.

Behind all this Cuban-style “dumping” there exists a clockwork mechanism which carefully manages the availability of foodstuffs and prices. General Raul Castro has created an army of anti-corruption  inspectors, headed by Gladys Bejerano, Controller General of the Republic. The idea is to put the brakes on this multi-headed monster which affects the life of the whole nation.

But for every vermin’s head that Bejerano gets close to, five more spring up. It’s totally evil. People think that we are dealing with something quite weak. They only go after the low and mid-level swindlers and crooks. Certain individuals, referred to as the “bosses of the bosses” carry on in their air-conditioned offices, calmly and unconcernedly watching what’s going on.

Photo: Collecting bricks from a building which collapsed in the path of Hurricane Gustav in Havana in August 2008