The “Cuba Experts” the American press loves to trot out in their coverage of the island to impart their wisdom on all things Cuba come from a variety of places and backgrounds.

In an interview today, The Council of Foreign Relations’ (CFR) Julia Sweig dropped this gem:

“Cuba doesn’t have a military junta running the country.”

Believe it or not — this is the CFR’s “Director of Latin American Studies” making this incredibly ignorant statement.

In addition, four out of Raul’s seven “Vice-Presidents” (and the most senior) are also generals:

Furthermore, over 50% of the Cuban economy in controlled by GAESA, S.A., headed by Colonel Luis Alberto Rodriguez Lopez-Calleja, which is the all-powerful business conglomerate of Cuba’s Ministry of the Armed Forces (MINFAR), headed by General Leopoldo Cintas Frias.

And approximately another 30% of the Cuban economy is controlled by companies under the Cuban Ministry of the Interior, headed by General Abelardo Colome Ibarra.

Is Cuba run by a military junta?  Obviously.

As The Financial Times wrote today, “Mr. Castro is a throwback to the Latin America of sunglass-wearing generals.”

CFR should be ashamed to have such misinformed “experts.” 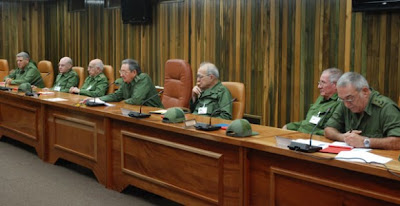 7 thoughts on “‘Cuba Experts’ who are neither Cuban, nor experts”