A few days ago, I got involved in a discussion on a post a friend had put up on Facebook regarding the ignorance most people in America have regarding Cuba, the Castro dictatorship, and U.S. policy towards the island. Of course, the usual suspects showed up to the discussion armed with their “the Castros want to keep the embargo in place because it’s an excuse for their failures” argument. I find it quite amazing that an argument, which not only ignores the facts but goes completely against them, has become such a popular one amongst the “end the embargo” group. Then again, we are talking about Cuba, where fantasy and fabrications trump reality and facts more often than not.

Here is the reality: The Castro dictatorship invests enormous amounts of time, resources, and cash into extensive efforts to lobby U.S. lawmakers to remove or weaken sanctions against them.

Nevertheless, for the aforementioned debaters who eschew the facts and continue to use this farcical argument, here is yet another pin to pop your fantasy balloon.

So badly, that for a decade he spent billions — in scarce hard-currency — trying to influence the U.S. Congress to do so.

Why? Because the return would have been many billions more.

(Of course, Castro is now focused on how many smaller concessions he can receive from the Obama Administration without having to spend a dime.)

As The Miami Herald reminds us today in a story about the former head of Castro’s trade monopoly, Alimport, Pedro Alvarez:

Before his hasty defection, [Alvarez’s] job at Alimport made him the powerful main negotiator of contracts with chomping-at-the-bit U.S. exporters that hit a record of $711 million in 2008 and turned the United States into Cuba’s fifth-largest trade partner.

[I]n 2003, Alvarez masterminded the controversial scheme under which Alimport pressured U.S. politicians and exporters to sign written pledges that they would lobby the Congress to ease economic sanctions on the island. The pledge might have technically made them agents of the Cuban government, though no one was prosecuted.

With such a powerful job, Alvarez would have been routinely briefed by Cuban intelligence on his U.S. contacts, their weaknesses and any misbehavior that could be exploited in price negotiations, Intelligence Directorate defector Juan Antonio Rodríguez Menier wrote in an email to El Nuevo Herald.

The directorate also had “collaborators that had been recruited within Alimport to identify possible targets to do industrial and corporate espionage,” said Juan Manuel Reyes Alfonso, who defected in 2000 from the DI’s science and technology section.

Alvarez was moved out of Alimport in 2009 and reassigned to head the Cuban Chamber of Commerce after it became clear that his lobbying campaign had failed to significantly change U.S. sanctions. 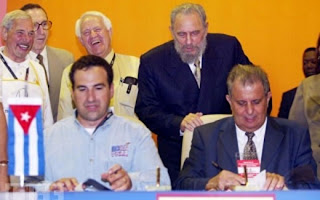