Not all dictators are equal; some are more equal than others.

The Golden Rule For Regional Democracy

“Never impose on others what you would not choose for yourself.”

“And as ye would that men should do to you, do ye also to them likewise.”

Why is one brutal dictator being (appropriately) tried?

A judge in Guatemala has begun pre-trial hearings in a genocide case against former dictator Efrain Rios Montt.

Rios Montt is accused of overseeing hundreds of killings when he ruled Guatemala from 1982 to 1983, at the height of the country’s 36-year civil war.

While another brutal dictator is being (tragically) feted?

Cuban President Raul Castro will take over the presidency of the CELAC Community of Latin American and Caribbean States from his Chilean counterpart.

How would Guatemalans feel if Rios Montt had been handed the reigns of a regional organization — or Chileans if it were Pinochet, or Argentinians if it were Videla?

It would have been a travesty.

The Americas are one (Cuba) and a half (Venezuela) countries away from being the first fully democratic region in human history.

But first, the region’s leaders need to be statesmen and stop turning a blind-eye to the repressive plight of their neighbors, for they are sending a dangerous message of acquiescence to those with authoritarian tendencies within their own countries.

And then, who will defend their democracy? 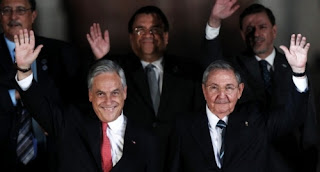 1 thought on “Not all dictators are equal”