After yet another attack against the Cuban American senator from Florida, it appears the folks over at Univision will just not let go of Marco Rubio. This vendetta and the attacks it generates goes back years, ever since Sen. Rubio committed the unpardonable sin for a Hispanic in the U.S.: being a conservative. And as his popularity rises, Univision gets more nervous and more vitriolic. “Oh. wow, the loser is going to speak after our President,” Artiles wrote on spokesman Alex Burgos’ Facebook page at 9:33 p.m. Wednesday. “Anything to get publicity. Ask him to do us a favor and stay home that night.” 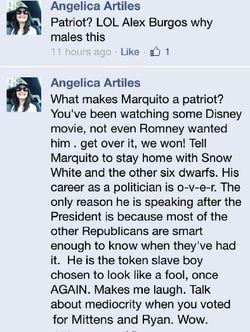 Sentiments like that reflect the prevailing political feeling among Univision’s higher ups at its Doral headquarters, Univision insiders have told The Miami Herald and El Nuevo Herald for more than a year. Artiles is executive assistant to Daniel Coronell, Univision’s vice president of news.

The network is owned by a major Democratic donor who has accused Rubio and other Republicans of having an “anti-Hispanic” stand on immigration that’s “despicable.”

In August, someone used Univision’s official Facebook account to attack Rubio during the Republican National Convention in Tampa.

“Beyond his ideology, Rubio is a mediocre politician who contradicts the values he says he represents. Jeb Bush is more Latino and talented than him,” the Facebook posting said.When first alerted by the website BuzzFeed, Univision announced it struck the statement and replaced it with a statement in Spanish that translates, “An unpleasant comment not authorized by Univision News was posted on this page. That comment does not represent the views of Univision News and we have taken steps to ensure that this situation does not happen again.”