This post was originally published here on August 2nd, 2011, and we thought it only appropriate to share it with our readers once again in preparation for tonight’s historical speech by Senator Marco Rubio as he becomes the first Cuban American to deliver the Republican Address to the nation.
_________________ 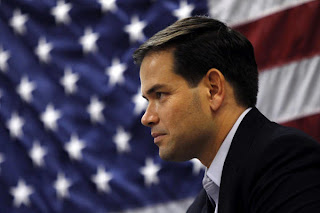 Last December, Val and I attended an event that featured appearances by several national politicians from both the Republican and Democrat parties. Several hundred people attended the affair, which included journalists and the people they write about. Along with other well-known congressmen and senators, then Senator-elect Marco Rubio was scheduled to give a short speech. And with the memory of Marco’s emotional and inspiring acceptance speech after his spectacular electoral victory the month earlier still fresh on our minds, Val and I joked about the treat the event attendees were about to receive.

Sitting next to me at our table, a journalist who had flown in from out of state to attend the event overheard our conversation and asked us about Marco Rubio. He said he had heard much about the young conservative Cuban American who had taken the country by storm, but he had yet to see him speak and was not completely convinced he was everything the press clippings made him out to be. Trying to figure out what all the commotion regarding Rubio was all about, he asked me why I thought Marco was so special. I thought for a moment and the best and most concise reply I could give him was to say he was the Cuban Ronald Reagan.

My answer was met with an incredulous chuckle. There is no doubt he believed my description was nothing more than Cuban hyperbole. But I held fast to my implication and explained to him how just like Ronald Reagan, Marco has the uncanny ability to connect with and inspire the American people. I told him how Marco subscribes to the same Reagan principles that the people are the ones who make America great, not the government. Still, I could tell he was not yet convinced, so I told him he would understand after he heard Marco speak.

When the announcer introduced Marco Rubio, we all watched him run up to the podium and begin his speech with no teleprompter and no notes in front of him. Nevertheless, for the next 10 minutes Marco kept the crowd’s undivided attention. The speech, which was given off the cuff, was impressive and inspiring and I could see our new journalist friend furiously scribbling notes as the speech went on. When Marco was done, he received a raucous round of cheers and applause, and when I turned to look at my tablemate, he had put down his notepad to join in the cheering.

“So what do you think now?” I asked him. “Do you still think I was exaggerating?”

“You were right,” he answered, shaking his head in disbelief. “You weren’t exaggerating.”

Listening to Senator Rubio’s speech on the Senate floor this past weekend you can see why this young, freshman Senator connects so well with the American people. He is a product of the American dream and he knows that it is the American people, not the government, who will bring this nation back from the brink of financial ruin. That is what Ronald Reagan always believed and would no doubt still believe today if he were alive.

Throughout the maniacal circus of manufactured deadlines, identity crisis, outright lies, half-truths, and convenient forgetfulness this debt limit crisis has become, one voice has risen above the cacophonous din of Washington’s circus calliope with straight talk and common sense solutions to the debt and spending problems that ail this nation. That voice belongs to Florida Senator Marco Rubio, and by himself he has managed to explain the dire situation facing the nation and provide viable solutions in terms the average citizen can understand. Like Reagan, his speeches inspire people with solutions that do not look to the government to solve the problem but to the strengths, ingenuity, and resiliency of the American people.

From this perspective, one cannot help but to compare Marco Rubio to President Barack Obama. Their similarities are numerous: freshmen senators, rising stars in their political parties, young, minorities, and both came from poor and humble beginnings. But the similarities end there.

In Barack Obama you have a leader who has crumbled under the pressure of leadership. Obama is so far out of his realm and operating so above his intellectual pay grade that he believes he can Tweet the country out of this economic mess. In Marco Rubio, however, you have a leader who has risen to the occasion, stepping to the front and answering the challenge with courage by speaking common sense, not by throwing temper tantrums and placing blame on everyone else. While Obama only has faith in his own government and Twitter to solve the problem, Marco places his faith in the American people. Just like Reagan always did.

Much is being talked about Marco Rubio being chosen as the Republican vice presidential nominee for the 2012 election and there are many who believe he should run for president in 2012. That decision will be Marco’s to make, but there is one thing we can be certain about: Marco Rubio is the real deal and we are all witnessing the emergence of the Cuban Ronald Reagan.