In Venezuela, Plenty of Oil, Not Enough Food

It’s the old story: Socialist government interferes with the marketplace, and the result is scarcity. 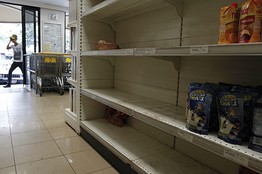 None of this should be surprising. Shortages are inevitable when socialist governments interfere with free markets through price and other controls. Then government officials blame the growers, manufacturers, distributors or retailers that the government itself is bankrupting.

What do Mr. Maduro’s threats portend for Venezuelans? For clues, examine the recent history of other socialist or Marxist governments including Cuba, the model that Messrs. Chávez, Maduro and their chavista disciples proudly admit to follow.

First the population cannot find food to eat and thus protests spread. Heads of households buy scarce edibles on the black market, trying to feed their families but becoming de facto lawbreakers in the process. The government denounces the shopkeepers and protesters as “counterrevolutionaries” and “agents of American imperialism.”

People and money flee the country, beginning with the job creators: financiers, investors, professionals, the highly educated, entrepreneurs, managers and eventually the workers and peasants in whose name the “revolution” is carried out.

To stem the flight of capital, the government imposes currency controls. It progressively monopolizes political, economic, judicial, military and police powers. Foreign investment slows to a trickle or stops. Companies begin to close due to lack of supplies or of demand, or are confiscated by the authorities, who add insult to injury by accusing them of economic sabotage and lack of patriotism.

In Cuba, food shortages began about six months after Fidel Castro began imposing Marxist policies in 1959. This was a full three years before the U.S. enacted an economic embargo that many today routinely and incorrectly blame for the Castro-era scarcities. Castro “solved” shortages by rationing food.

In another former middle-income country, Chile, socialist President Salvador Allende generated food shortages quickly after taking over in 1970. His violent overthrow in 1973 was preceded by vast demonstrations of citizens marching through the streets banging empty pots and pans—a form of popular protest called cacerolazos. The empty cooking devices symbolized the Chileans’ inability to feed their families.

It took 14 years for scarcities to reach crisis levels in Venezuela under Mr. Chávez, mostly because that nation is blessed with the world’s largest proven oil reserves. But even with a national income in excess of $300 billion, as reported by the World Bank, socialism has produced shortages in prosperous Venezuela as it has in previously agriculturally self-sufficient Cuba and Chile. There are already cacerolazos protests in Venezuela.

Based on experience in Cuba, the former USSR and Eastern Europe during the Cold War, the ruin brought about by socialist economic policies inexorably leads to further government repression. The press is censored, with the government justifying its actions by pretending to protect the people from press “falsehoods” about the reasons for “temporary” shortages. Coercion and hunger swell public anger. Protesters are beaten, jailed and occasionally executed. To prevent reports of dissent from reaching foreign ears, the government supplants independent press with government-run media, because even tyrants abhor bad publicity.

Inevitably, all dissent, especially that at the grass roots, must be extinguished lest someone reveal that the Emperor has no clothes. If the people are so ungrateful or foolish as to not understand that all the central government’s actions are being imposed upon them for their own good, then they will have to be taught that lesson by force.

Millions of Cubans can attest to this wretched state of affairs. Not so the more than 6,000 Cubans who have been killed over the last half century for opposing the Cuban model of socialism—a model that even Fidel Castro finally admitted, in 2010, “doesn’t even work for us anymore.” Socialism is obviously not working in Venezuela either.

Mr. Reich is a former U.S. ambassador to Venezuela and assistant secretary of state for the Western hemisphere. As a young man he experienced the dictatorships of both Fulgencio Batista and Fidel Castro.

1 thought on “In Venezuela, Plenty of Oil, Not Enough Food”