Protests outside the Cuban embassy in Caracas, Venezuela, turned violent yesterday when security personnel for Venezuelan dictator Hugo Chavez viciously attacked the students and arrested several of them. Moreover, reporters from Televen and El Universal who were covering the demonstration were not spared from the violence. The photo below shows one of Chavez’s Bolivarian National Guardsman attacking a reporter at the protest. 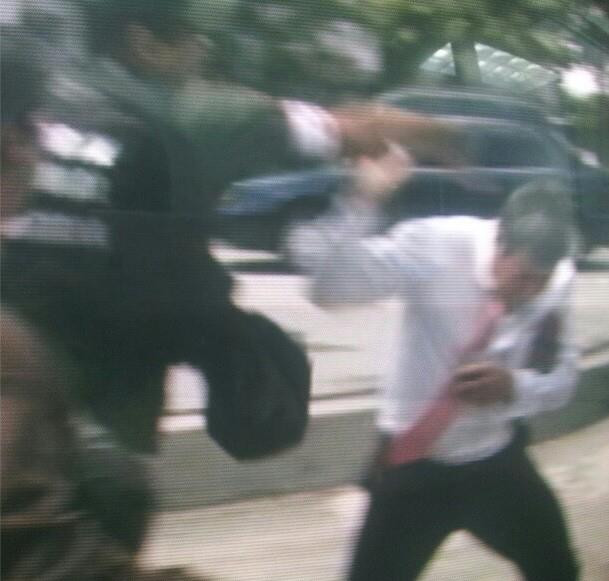 Coverage of the protests via the AP:

Venezuelan students protested in chains outside the Cuban Embassy in Caracas on Thursday, condemning what they say is the Caribbean nation’s meddling in their country’s affairs while President Hugo Chavez remains on the island undergoing cancer treatment.

Some students exchanged shoves with police in anti-riot gear outside the embassy. Protesters sang the Venezuelan national anthem, wearing chains and cords wrapped around their bodies and bound with locks in a representation of what they view as a government beholden to Cuba’s interests.

“We demand respect for our sovereignty. We don’t want any more Cuban meddling in Venezuela’s affairs,” said Gabi Arellano, a student leader.

Arellano said the students are also protesting against Chavez’s long absence and the way it has been handled by the government. “We can’t continue in uncertainty and adrift,” she said.

Chavez remains in Havana undergoing unspecified treatments following his fourth cancer-related operation on Dec. 11. He has hasn’t been seen or spoken publicly in more than two months.

The group of about 20 university students protested outside the embassy throughout the day.

When some tried to approach the embassy to hand over a document summarizing their protest at about noon, they were pushed back by National Guard troops. Seven protesters were reported detained for several hours, and later were released.

The National Journalists Association reported that three journalists were roughed up by National Guard troops while covering the protest.

The students laid mattresses on the ground and said they planned to stay and keep protesting. Some traveled from other parts of the country to join the demonstration.

Photographs from the protests available HERE.