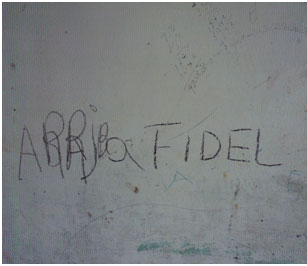 Members of the Orlando Zapata Tamayo National Civic Resistance and Civil Disobedience Front, the Patriotic Union of Cuba (UNPACU), the Pro Human Rights Party of Cuba Affiliated to the Andrei Sajarov Foundation, and the Miguel Valdes Tamayo Popular Movement for Human Rights marched together in Boyeros, Havana, this past Thursday 21st of February, demanding a free Cuba and paying tribute to Orlando Zapata Tamayo, political prisoner who died after a hunger strike and torture in prison 3 years ago this 23rd of February, and also in honor of the victims of the Brothers to the Rescue, Cuban-Americans who were shot down by the dictatorship over international waters for flying small planes trying to help rafters out at sea.

Sara Marta Fonseca Quevedo, Lady in White and member of the Pro Human Rights Party and the National Resistance Front, who is also a resident of Boyeros, could not participate in the demonstration but explained that the dissidents “marched peacefully down the centric Boyeros avenue, walking at least 300 meters while shouting anti-government slogans and slogans in honor of Orlando Zapata for the third anniversary of his death, a death which only has one culprit: the Cuban government“.

Zapata’s jailers beat him on various occasions during his hunger strike and refused him water. His strike, as well as his death, awoke a wave of solidarity amongst Cubans in and out of the island as well as non-Cubans around the world, eventually creating pressure against the Cuban dictatorship, managing the release of the rest of the political prisoners jailed during the Black Spring of 2003.

The march on Thursday culminated, without any arrests or acts of repudiation from the everyday people, at the home of Rene Ramon Gonzalez Bonelly, which is also the sub-headquarters of the Pro Human Rights Party, located in the Baluarte neighborhood of Boyeros.

However, minutes after, Sara Marta denounced that mobs organized by the regime had surrounded the house, starting an act of repudiation.  Her own home was also under strict police vigilance.