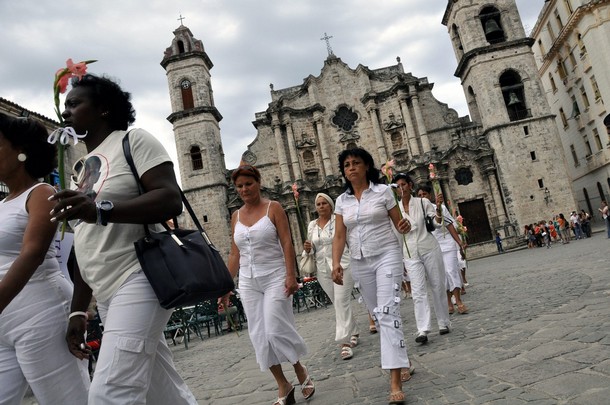 Approximately fifty Ladies in White were harassed and arrested yesterday by Cuban State Security agents as they marched peacefully in Havana carrying photographs of slain opposition leader Orlando Zapata Tamayo and wearing black ribbons in honor of the anniversary of his death.

In other parts of the island, opposition members who took to the streets to protest on the anniversary of the killing of the Brothers to the Rescue pilots and the murder of Orlando Zapata Tamayo, which are only a day apart, were violently beaten and arrested in several different cities as well.

Right now several regime opponents are being violently arrested in the city of Placetas as they are trying to go out into the streets to honor the martyr Orlando Zapata Tamayo and the four Brothers to the Rescue pilots murdered on the orders of Fidel and Raul Castro.

Similarly, minutes ago it was reported that other members of the opposition in the city of Camaguey were violently arrested inside the Fernandez Santos Housing project.

Also, several opponents threaten to take to the streets in the town of Violeta, in Ciego de Avila province if their leader Julio Colombie Batista is not released.

Also there is an operation mounted outside his home, with music, rum and loudspeakers, placed there by order of State Security, to prevent opposition activities.

Keep in mind that these arrests and blatant violations of human rights all took place while the world’s attention was focused on the farcical proceedings taking place in Cuba’s communist parliament where (surprise, surprise), Raul Castro was elected dictator once again and loyal regime apparatchiks were appointed to alleged positions of power that in reality have no power whatsoever.

1 thought on “Cuba: Ladies in White and other human rights activists arrested by State Security this Sunday”