During an interview with CNN‘s “State of the Union,” U.S. Senator Patrick Leahy (D-VT), who just returned from a visit with Cuban dictator Raul Castro, said it will require “give and take on both sides” and “quiet negotiation” to secure the release of American development worker, Alan Gross.

CNN‘s Candy Crowley nodded along as Senator Leahy criticized U.S. policy, but here’s what she failed to ask:

1. Upon Alan Gross’s imprisonment in December 2009, the Obama Administration engaged the Castro regime in “quiet negotiations” and unilaterally eased sanctions in January 2011.  How much more “giving” is required before there’s a “take-away”?

2. Since Raul Castro has been dictator-in-chief, repression in Cuba has dramatically risen, with political arrests reaching historic highs.  Did you express your concern to Castro about the rise in violence and repression by his regime?

4. In February 2012, you took a similar trip to Havana, where you met with Cuban dictator Raul Castro and similarly wined and dined with senior regime officials — to no avail.  How was this trip any different?

5. Pursuant to the murder of four Americans by the Castro regime seventeen-years ago today, you voted against any repercussions towards the Cuban dictatorship   Today, you feel the same way about the unjustified taking of an American hostage.  At what point should the Castro brothers be held accountable for their criminal acts?  How come you didn’t feel the same way about the democratically-elected government in Colombia, to whom you consistently blocked aid for human rights violations? 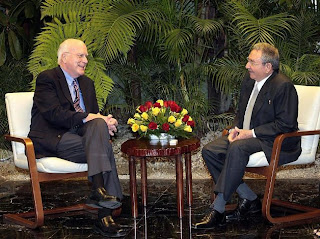