While analysts and pundits have spent the last few days contemplating the “changes” and new political appointments announced by dictator Raul Castro in Cuba this past weekend, the weekend was just like every other weekend for Cuba’s opposition: repressive, violent, and brutal. Under orders of the Castro dictatorship, jackbooted squads were out in full force delivering violence, repression, and arresting more than 170 dissidents in an island-wide sweep. 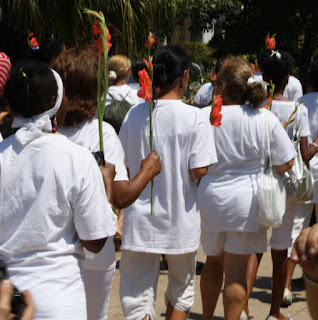 Havana, February 26 – At least 171 opposition members have been arrested in different parts of the country between the 21st and 24th of February as they attempted to pay homage to opposition leader Orlando Zapata and the four pilots from Brothers to the Rescue.

In Havana, 56 women from the Ladies in White movement and 21 men from different opposition organizations were arrested on Sunday in the Miramar neighborhood after attending a church service and marching down 5th Avenue.

The 56 Ladies in White were arrested as they walked down 34th street between 1st and 3rd in Miramar, an attempt to pay homage and in remembrance of Orlando Zapata and the four pilots who were assassinated under orders of Fidel and Raul Castro.

Using extreme violence, the repressive forces of State Security and the Interior Ministry, forcibly loaded the women into buses and took them to a military base located in Tarara, while the men were taken to police stations, the majority of them to the 4th Unit in the Cerro municipality.

The repressive forces had mobilized a group of thugs and paramilitary Rapid Response Brigades, stationing them on 3rd avenue to attack the activists.