It is absolutely shameful that an elected official of the United States would come out in defense of five spies who were engaged in espionage here in the U.S. for a country that has deep ties with terrorist regimes and on top of that, were responsible for the murder of four innocent Americans.

Cuban state media has revealed that during his recent visit to Havana, U.S. Rep. Jim McGovern (D-MA) defended five Cuban spies tried by U.S. federal courts in 2001 and convicted on conspiracy to commit espionage, conspiracy to commit murder, acting as an agent of a foreign government and other illegal activities in the United States.

According to Granma (exact quote):

“The legislator admitted that in prisons in his country ‘there are five Cubans jailed for transmitting information about the (violent) activities of Cuban-Americans,’ and that in talks with Raul Castro he ratified that ‘those five Cubans don’t deserve to be in jail.’”

It’s not the first time McGovern is associated with such unsavory figures.

He was widely and infamously referenced in messages found in the hard-drive of Raul Reyes, the narco-terrorist FARC’s second-in-command, who was killed by the Colombian military in 2008.

Thus, Cuban dictators and spies are right up his alley.
According to the U.S. Office of the National Counterintelligence Executive, the activities of these Cuban spies included:
• The infiltration of the US Southern Command headquarters in Miami—according to Cuba, “one of the new prioritized objectives that we have in the Miami area.”
• The activities of Cuban exile groups in Miami and tactics to disrupt those groups by, among other things, “creat(ing) animosity” between specified groups and attempting to discredit certain individual leaders.
• The activities at the Boca Rica Naval Air Station as well as reports on an apparent military topic identified by Cuba that “continues to be of great importance to our comrades at DAAFAR (Cuban Air Force Command).”
• The manipulation of the media, political institutions, and public opinion, including using anonymous or misidentified telephone calls and letters to media and political figures.
Read the details here. 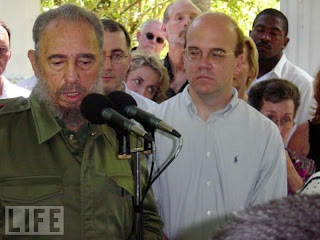