On her stop in Prague, Cuban dissident and blogger Yoani Sanchez called for more changes in Cuba:

Cuban dissident insists on more changes in Cuba while in Prague 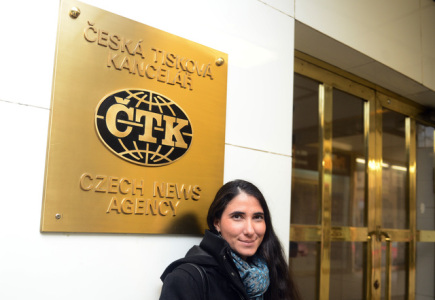 Prague – The changes implemented by Cuban President Raul Castro are only partial and the world should not be misled by them, Cuban dissident Yoani Sanchez told CTK during her visit to Prague today.

The persecution of the opposition in Cuba is as intensive as under the rule of his brother Fidel Castro, the number of political prisoners is not falling and information is strictly censored, Sanchez, 37 said.

The Cuban authorities let Sanchez, a political writer, travel from the country after years of her vain attempts at travelling from Cuba.

In January, the Cuban Communist regime amended the migration law under which Cubans can travel only with a valid passport while previously they also needed a special permit.

After enacting private business, this is another of the changes the Communist regime has made under the pressure of economic dire straits.

Sanchez said the essential problem of the country, political oppression, had remained unchanged.

The view is spreading across the world that Cuba is changing, but this is dangerous, Sanchez said.

It may happen that a great deal of people and international organisations will stop focusing on Cuba whose government will maintain in an easier way its tough political control, she added.

Castro’s secret police persecutes Sanchez because she maintains the independent blog Generacion Y where she criticises the regime’s practices.

She said the situation of opponents of the Cuban regime was very similar to what dissidents in the former Czechoslovakia had experienced during the re-Stalinisation era in the 1970-1980s.

Sanchez said she knew well the faces of the agents who were in charge of her.

She said she was often shadowed by the same persons who stand outside her house, being behind her when she strolls through the town.

Sanchez said she recalled the German film The Lives of Others (Das Leben der Anderen) in which one of the secret service agents started adopting a critical attitude to the regime.

She said she was also trying to change the police and state security agents.