Little by little, at a painfully slow pace, the news of Rosa Maria Paya and her call for the Castro dictatorship to be exposed for its assassination of her father Oswaldo Paya is being covered.

Via the UK’s The Guardian: 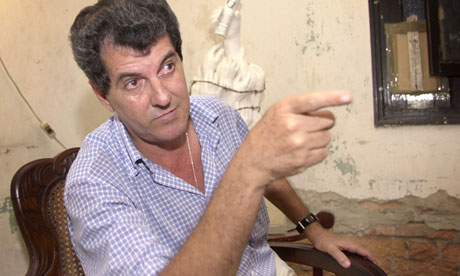 Spain’s government is aiding a cover-up of the mysterious death of one of Cuba’s most respected opposition leaders, Oswaldo Payá, who died after the car he was travelling in was rammed by an unmarked police car, according to his daughter.

Rosa María Payá accuses Mariano Rajoy’s government of putting pressure on the young Spanish politician who was driving the car to remain silent about what she claims was probably murder.

The politician – Angel Carromero of Rajoy’s conservative People’s party – recently returned to Spain. He is now serving out the rest of a four-year jail term handed down to him in Cuba for allegedly causing the death of Payá and fellow passenger Harold Cepero through reckless driving on 22 July last year.

A Cuban court declared that no other vehicle was involved in the accident and that Carromero, who was also accompanied by the Swedish Christian democrat youth leader Aron Modrig, had been driving too fast.

But Rosa María says Payá was killed after a government vehicle hit Carromero’s car first, and wants to know why the two foreigners were taken to hospital and survived while her father, who received regular death threats, and fellow anti-Castro activist Cepero died.

“There is a lot of pressure on him not to talk from his own government,” she told the Guardian after meeting Carromero in Madrid last week.

Spanish government officials denied the 27-year-old politician was being put under pressure and said that he had recognised the Cuban court process as valid.

But Carromero broke his silence this week, telling the Washington Post that he had been bullied into signing a confession that he was responsible for the accident and that no other car was involved. He said the car that the four men were travelling in had been trailed by several vehicles during the day. A new car bearing official number plates had just taken over and began harassing them and driving very close when he felt a bump in the back of his hire car and spun off the road.

“The last time I looked in the mirror, I realised that the car had gotten too close – and suddenly I felt a thunderous impact from behind,” he said.

He lost control of the car and then passed out, waking up in the back of a van before blacking out again and coming around on a hospital stretcher.

“The first person who talked to me was a uniformed officer of the ministry of the interior,” he said. “I told her a car had hit our vehicle from behind, causing me to lose control.”

He said he stuck to his story over the following days until Cuban authorities started threatening him.

1 thought on “Cuba: Rosa Maria Paya continues to speak out on her father’s assassination”