It could not have happened to a nicer bunch of despotic and vile dictators: The Castro dictatorship’s national baseball team was eliminated yesterday from the World Baseball Classic.

There is no doubt Havana is now busy choosing heads to roll on the national baseball team. For a regime that places so much importance on sports — baseball in particular — as a propaganda tool, Cuba’s loss yesterday to the Netherlands had to have left many Cuban dictatorship faces red in anger. 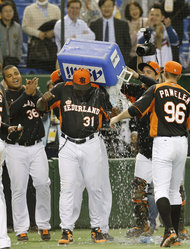 TOKYO — Kalian Sams hit a ninth-inning sacrifice fly to cap a come-from-behind, 7-6 win over Cuba on Monday night at Tokyo Dome that sends the Netherlands to the World Baseball Classic semifinals in San Francisco next week.

“The better team won this game tonight,” said Hensley Meulens, the manager of the Netherlands team, who labeled the game the biggest in Dutch history. “Cuba played a good game, but we played a better game.”

The Dutch advance to the championship round, on Sunday and Monday, for the first time. Cuba was eliminated.

The teams entered the game going in opposite directions. Cuba battered Taiwan, 14-0, on Saturday, while the Netherlands allowed six home runs, which tied a World Baseball Classic record, in being pummeled by the two-time champion Japan, 16-4, on Sunday.

This one was a nail-biter.

After Cuba took a 6-4 lead in the top of the eighth, Dutch shortstop Andrelton Simmons belted a two-run home run into the seats in left field in the bottom half to even the score.

“I was looking at the pitcher and he was coming in with the same pitch,” Simmons said. “He left one where I like it, and I didn’t miss it.”

In the bottom of the ninth, the Dutch loaded the bases with one out. That brought Sams, an outfielder, to the plate.

“They were playing kind of in, and I thought, I can’t miss this pitch,” he said.

Even before the fly landed in the glove of center fielder Yasmany Tomas, the Dutch players had congregated around the plate to welcome Andruw Jones. Once he crossed home, a jubilant sea of orange swept the field.

Translation: “Since sports in Cuba is the regime’s favorite political tool, I’m glad the baseball team was eliminated from the Classic.”