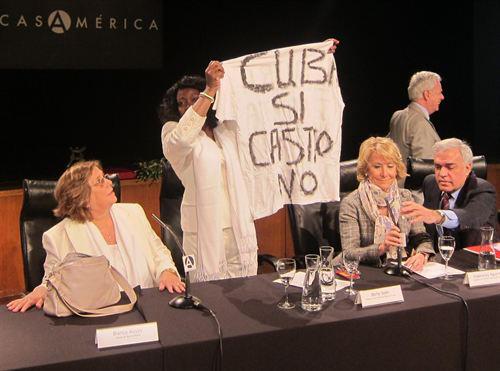 It is amazing what one Cuban women can do, seemingly moving mountains by setting her mind to it and with incredible courage. Lady in White Berta Soler is one of those Cuban women. She does not have the following others have, or the promotion and protection of the press, but all by herself, through courage and sheer force of will, she has done more to advance the cause of freedom in Cuba in just a few days than the most erudite Cuban intellectual has been able to accomplish over a span of years.

It should not surprise anyone that Berta Soler is that type of Cuban woman. She has stood face to face with the terror and brutality of the murderous Castro dictatorship. She has fought the battle for freedom in Cuba not in academic conferences, forums for intellectuals, or the internet, but on the streets of Cuba. She has been brutally beaten, arrested, imprisoned, facing the daily physical repression of Cuban State Security with courage and dignity. It is one thing to say you are against the dictatorship of the Castro brothers, but it is another thing completely to physically confront and challenge that oppression.

That is what Berta Soler is all about. Her and dozens of other valiant Cuban women who remain nameless because of the media’s refusal to cover their plight, are the pride of Cuba. They are willing to do what so few Cubans are willing to do: Take to the streets and challenge the Castro regime.

This is why the Cuban dictatorship fears Berta Soler and those like her so much. The ones who only speak the regime can deal with, but the ones who physically challenge them are the ones they fear. And when someone like Berta Soler, who has the physical scars from her opposition to tyranny is finally able to speak to the world with microphones and cameras documenting her words, the regime really gets nervous.

MADRID (AP) — A well-known Cuban dissident urged support from Europe on Tuesday for her group advocating democracy in Cuba, and wasn’t fazed when protesters disrupted her first appearance abroad by unfurling a pro-government banner and yelling that she was lying about harsh conditions for citizens of the island nation.

Berta Soler, the most prominent member of the Ladies in White group, told a crowd of about 100 in Madrid that she was basking in her first opportunity to say what she wants without fearing retribution. She had never been allowed to leave Cuba before.

Soler alleged that Cuba keeps about 80 dissidents locked up in miserable jails alongside convicted murderers and rapists and said the communist-run government led by Raul Castro only offers Cubans “repression, misery and lots of hunger.”

Most of those inmates are not recognized as prisoners of conscience by international human rights groups, however. Some were locked up for nonpolitical crimes and became activists behind bars; others are in jail for politically motivated but violent crimes like hijacking or sabotage.

Just before the event with Soler ended, about eight people in the crowd snuck a banner out of a backpack reading “Long Live the Cuban Revolution” and shouted that Soler was lying, scuffling with security guards as they were shooed out of a conference hall in downtown Madrid.

Smiling, Soler told the audience that she welcomed the demonstration, similar to a protest in Brazil last month when pro-Cuba protesters halted an event featuring prominent Cuban blogger Yoani Sanchez during her first trip abroad in years.

“What has happened is normal because we are in a country where democracy and liberty exist. If they want to talk, let them talk,” Soler said to applause from an audience that shouted “Cuba Yes!, Castro No!” in response.

2 thoughts on “The courage of Berta Soler: What the Cuban dictatorship truly fears”