Erwin Harris left behind a respectable record of achievement as an advertising executive, an estimable collection of Chinese antiquities (his lifelong hobby), a loving family and a remarkable if little-remembered role in the tortured history of diplomatic relations between the United States and Cuba in the early 1960s.

Mr. Harris, a Yonkers-born World War II veteran who died in Miami on March 9 at 91, probably did not tip the scales of history. But from 1960 to 1961, armed with nothing more than a court order from a Florida judge and accompanied by local sheriff’s deputies, he scoured the East Coast confiscating Cuban government property — including the state airplane Fidel Castro parked in New York while on a visit. 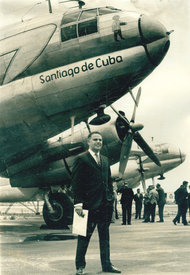 It was a dogged mission in pursuit of compensation for what he said Mr. Castro owed him: $429,000 in unpaid bills stemming from an advertising campaign promoting Cuban tourism.

In September 1960, he took control of Mr. Castro’s personal government plane while Mr. Castro was in New York for a 10-day official visit, and began arranging to have it auctioned. (“Cuban Airliner Seized Here,” trumpeted the front page of The Daily News.)

The Soviet leader, Nikita S. Khrushchev, stepped in to replace the plane Mr. Harris had snatched, and on Sept. 28, a reporter watching Mr. Castro board the Soviet aircraft at Idlewild Airport (now Kennedy International) described him as smiling “almost defiantly.”

By then, Mr. Castro had added airplane stealing to the litany of abuses he said were being perpetrated against his country by the American government. In a fiery four-hour speech to the United Nations, he said the purpose of the abuse was to restore Cuba to its prerevolutionary status as “a colony” of the United States and American monopolies.

Despite heated phone calls between United Nations officials and the State Department, half the members of the Cuban delegation were still scrambling for flights home and the rest were returning on the Soviet aircraft.

Philip Brenner, a professor of international relations at American University in Washington, said a tense and hectic atmosphere that week probably helped Mr. Harris carry out his seizures, especially of Mr. Castro’s turboprop plane. Debates had erupted over United Nations membership for the People’s Republic of China, Soviet and American officials were jockeying over proposed disarmament talks, and the first presidential debate between Senator John F. Kennedy and Vice President Richard M. Nixon was broadcast that week.

“Everything was so wild, I’d guess the authorities were just blindsided by this guy,” Dr. Brenner said.

Many of Mr. Harris’s seizures were contested, and some properties, including Mr. Castro’s plane, were returned. Mr. Harris recovered part of his money, though not all, selling confiscated property at auction far below its value.

His wife, Theresa, who confirmed his death, said he was eventually forced to file for bankruptcy.

Mrs. Harris said her husband was motivated by simple indignation and a wish to be paid. As far as she knew, she said, he never received help from intelligence agencies in locating Cuban assets, though he had served in an Army counterintelligence unit during World War II.

2 thoughts on “Erwin Harris: The man who chased down deadbeat Fidel Castro”