Nelson calls for independent investigation into death of Cuban dissident

WASHINGTON, D.C. – On the heels of his meeting today with Cuban opposition blogger Yoani Sánchez, U.S. Sen. Bill Nelson (D-FL) called for an independent investigation into the car crash that claimed the life of another Cuban dissident, Oswaldo Payá.

Nelson made the call in a letter to United Nations Secretary General Ban Ki-Moon.  In his letter, Nelson asked for an independent panel to investigate the events surrounding the death of Payá and youth activist Harold Cepero in the auto accident last summer.

His request was spurred not only by his visit today with Sanchez and hearing her views on Payá, but also by an interview Payá’s driver gave to the Washington Post just recently.  In the interview, Ángel Carromero described how the group was followed by a vehicle with government plates and then hit with a “thunderous impact from behind.”

“Given this new information,” Nelson said today, “it is time for the international community to insist that a thorough investigation occur.”

The senator’s comments followed his meeting this morning with Sánchez, who recently received a passport under Cuba’s new travel and migration policy, and is on a world tour discussing freedom and democracy for the Cuban people.  She has publicly expressed desire for an independent investigation into Payá’s death, and reiterated her concerns to Nelson this morning.

She visited Congress today at the invitation of Nelson and other lawmakers.

Meantime, the circumstances of Payá’s July 23 death remain in dispute.  According to The New York Times, Cuban officials said the crash, near the eastern city of Bayamo, occurred when the driver lost control and hit a tree, killing Mr. Payá and another Cuban and injuring two passengers, one from Spain, the other from Sweden.

But, the newspaper has reported, some Cuban dissidents said witnesses saw another vehicle hit Mr. Payá’s.

Following is Nelson’s letter to the U.N. secretary: 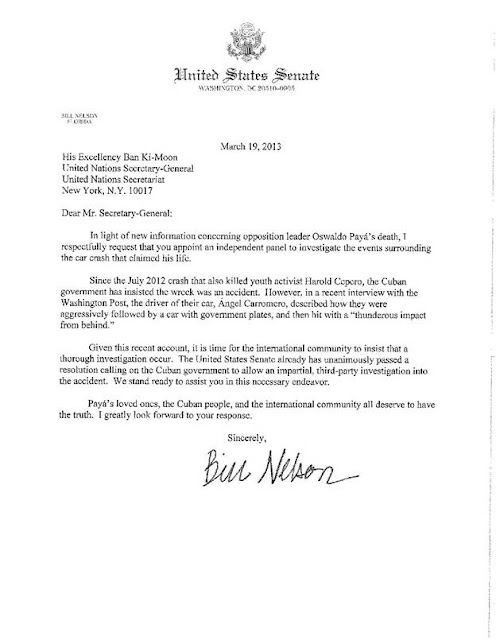 1 thought on “Sen. Bill Nelson calls for independent investigation in to death of Cuban dissident”