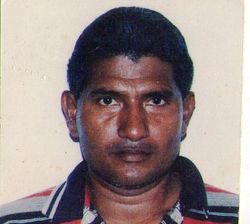 Political prisoner Ariel Arzuaga Pena, who is suffering various health ailments, was recently transferred to a penitentiary camp in the municipality of Bayamo, where he will not receive adequate medical attention, according to his wife Jaquelin Garcia Jaenz, a member of Cuba’s Ladies in White.  Arzuaga was previously being held in the provincial prison of Granma.

“Ariel was transferred to the penitentiary, according to what the officials told me, due to all the health issues he is suffering, such as chronic pharingitis and advanced osteoporosis“, explained Garcia Jaenz, highlighting that in the prison he was being exposed to freezing temperatures many times and other times very humid conditions.  However, she denounces that “he needs to be constantly attended by a doctor, but in the mentioned penitentiary there is no solid medical attention.  In other words, the doctor only passes by once a week“.

The activist also recounts that her husband cannot apply any physical force or heavy lifting (due to the advanced osteoporosis on his spine) but he managed to tell her that in the new center he “has to carry the bucket of water to shower and has to clean the bathroom when it is his time to carry out his necessities“.