What “Drives” Us Against Odebrecht?

The President of Odebrecht USA, Gilberto Neves, claims to be unaware of why we oppose his company’s business ties with Cuba.

“I don’t know what’s driving them,” Neves told The Miami Herald about efforts to stop public contracting with Odebrecht, while it continues partnering with the Castro regime.

– For over a decade, Odebrecht has received billions of dollars in taxpayer money from Cuban-Americans in Miami-Dade County, a community that has suffered greatly at the hands of the brutal Castro dictatorship.

– Insensitive to this, in 2010, Odebrecht entered into a strategic partnership with the Cuban military to modernize the Port of Mariel, a priority business objective of the Castro regime.

– It is also partnering with the Cuban military to create the Mariel Special Development Zone, in order to facilitate “maquilas” (and exploit slave labor) for the Castro regime, a known violator of international labor norms.

– In order not to offend the Castro regime and complete the deal for Odebrecht, Lula compared Orlando Zapata Tamayo and Cuban dissidents to “common criminals.”

– During her recent trip to Brazil, Cuban blogger Yoani Sanchez publicly questioned the Brazilian government’s indifference to human rights violations in Cuba.  The answer is simple: Brazil’s silence and indifference is to protect Odebrecht’s business ties with the Castro brothers.

– Florida taxpayers spoke nearly unanimously – through their elected representatives – not to have their money spent on companies that do business with the brutal dictatorships of Cuba and Syria.

– Due to Odebrecht’s absolute unwillingness to sever ties with the Castro dictatorship, it instead decided to legally challenge the democratic will of Florida’s taxpayers.

– Nearly 62% of Miami-Dade County voters said during the November 2012 election that they did not want their taxpayer funds used to contract with companies that partner with the regimes of Cuba, Iran, Syria and Sudan.

– Odebrecht has proven it has no respect for Florida’s taxpayers, let alone for the victims of Castro’s dictatorship.

– Used to inking back-room deals with the Castro brothers in Havana, Chavez in Caracas and Gaddafi in Tripoli, Odebrecht wants to force its will upon the taxpayers of Miami-Dade County.

The question remains: Will Miami-Dade County’s elected officials allow them to do so? 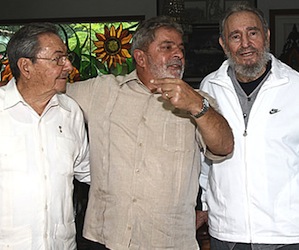 2 thoughts on “What ‘Drives’ us against Odebrecht?”