Via Guamá (my translation):

BEYONCÉ IN CUBA · The self-employed opine 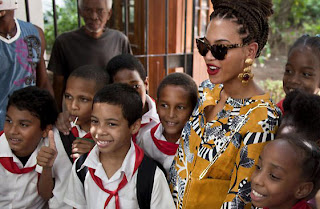 “In the videos she looks really hot… but live and up close she’s just another regular looking chick” Papito, sandwich maker

“My chick is much hotter than her, dude!” Luis, disposable lighter refiller.

“That hair is not hers… those are extensions. That’s doll hair, girl…! Lourdes, peanut vendor.

“My goodness, look at her, she’s a little stump. And she looks so big on the TV screen!” Yaima, manicurist.

“I’ve had some real mulatas at El Diezmero that are way better.” Ramoncitin, bicyle taxi driver.

“The truth is that these Americans without makeup have no shine.” German, hairdresser.

“But I thought she was lighter skinned, I don’t like her anymore.” Roberto, street vendor.

“And a black guy wearing a Che t-shirt, who does he think he is?” Miguel, Committee for the Defense of the Revolution leader.

“She should’ve worn a Vilma t-shirt.” Pauito, second Committee for the Defense of the Revolution leader.

“The thing is that in spite of the blockade, Havana is super famous, girl!” Barbara, secretary.

“Look at the legs on her boyfriend! Did you see that?” Justina, button upholsterer.

3 thoughts on “Beyonce in Cuba: The self-employed opine”