When your time in Havana is carefully planned and controlled by the Castro dictatorship, it is difficult to sneak away to see what else is going on in Cuba. That was the case this past weekend with U.S. Rep. Kathy Castor (D-FL) and music industry power couple Beyonce and Jay-Z. These prominent Americans, ambassadors of the American spirit of democracy and freedom, had a busy weekend being led around Havana as VIP guests of the Castro dictatorship from one regime-sponsored event to another. For that reason, they were way too busy to comment on, let alone schlepp all the way to the city of Santiago to witness the arrest of 58 defenseless and peaceful Ladies in White, a group of human rights activists who are the wives, daughters, sisters, and mothers of Cuban political prisoners. Their crime? Marching to church together peacefully to attend Sunday services.

At the very moment when these brave and courageous women could have used the support of these ambassadors of American freedom, these Americans were all too busy enjoying special events put together just for them by officials of the Castro dictatorship. Sure, you can say they were not aware these arrests took place, but then you would have to examine why that is the case. Once you do, you realize it is because they were too busy enjoying themselves in Havana as VIP guests of the Castro dictatorship.

The Ladies Who Beyonce and Castor Ignored

While American pop star Beyonce and U.S. Rep. Kathy Castor (D-FL) were toured around Havana by Castro regime officials this weekend, Cuba’s Ladies in White took to the streets in pursuit of freedom and democracy.

The Ladies in White is a pro-democracy group composed of the mothers, daughters, wives and other relatives of Cuban political prisoners. They wear white clothing to symbolize their peaceful, non-violent opposition.

Yet sadly, like every week, they are confronted by the violence of Castro regime officials — and the silence of its foreign guests.

Yesterday, in the eastern city of Santiago, 58 of the Ladies in White were brutally detained in order to prevent them from attending Mass.

Smaller groups of 5 and 10 managed to conduct peaceful protest walks in the cities of Guantanamo and Colon.

In Havana, 54 of the Ladies in White, led by Laura Labrada and Belkis Cantillo, walked as a group to attend Mass at Santa Rita Church.

Couldn’t Beyonce and Castor spend 5 minutes from the hours upon hours they dedicated to the Castro regime to join these courageous women– or to even publicly express their solidarity? 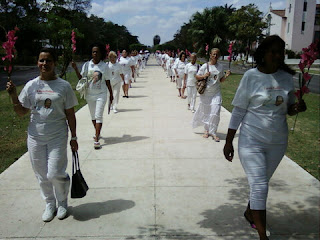