His desire to sell North Dakota peas, lentils and soybeans to Castro’s monopoly, Alimport, led him to carry water for the Castro regime on a host of non-agricultural issues — from tourism to eliminating Radio and TV Marti.

Such efforts certainly earned him the good graces of the Castro regime.  North Dakota farmers would even gloat how mentioning Dorgan’s name in Havana opened doors with regime officials.

In contrast, Dorgan never lifted a finger for democracy activists on the island — for that would jeopardize his agricultural sales.

So it’s no surprise that Dorgan (now a lobbyist at Arent Fox) wrote a column in Roll Call this week on easing travel sanctions towards the Castro regime.

However, it was the disclosure at the end of his column that raised eyebrows:

“Former Sen. Byron L. Dorgan, D-N.D., is a senior policy advisor at Arent Fox LLP, which does not have any clients that would benefit from the views expressed here.”

Havana Ferry Partners is among a handful of U.S. and international companies that want to offer Florida-Cuba ferry service, which had been popular before the embargo. It first applied for a license in 2010. Also interested in the route are Orlando’s United Caribbean Lines, Paris’ Unishipping and Spain’s Balearia, among others. 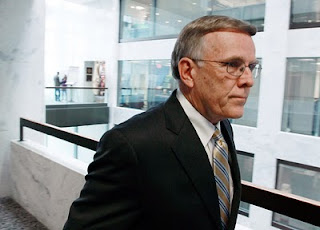 1 thought on “The slimy, immoral business of lobbying for Cuba’s Castro dictatorship”