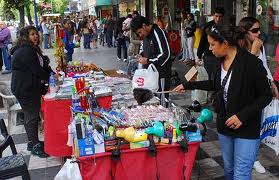 On two occasions in Guanabo, a seaside town east of Havana, the authorities launched an action against the vendors who gather at 5th Avenue and C; but this Saturday there were much more despotic and cruel, because along with the abuse, the seized the goods of the self-employed.

Local residents and those of us who learned of the abuse wonder why they confiscate things from people that they had to pay for. Residents also question why they are now forbidden to sell on the town’s main street, with the coming of the season when the place is full of Cubans who go there to swim and they may find it easier to sell their products.

As usual, the police don’t give explanations about the change and nor do they give any reason for the abuse or the use the expropriated goods are put to. What they do make clear is that they have no interest in promoting trade and supporting the vendors.

It came to mind, in contrast, how the merchants on 23rd or on G, in Havana, are permitted and no one comes and throws them off those streets. The answer may be that it is easier to abuse people and violate their rights on the outskirts of the city, away from witnesses and bystanders of all colors and influences, and far from embassies and tourists with cameras.