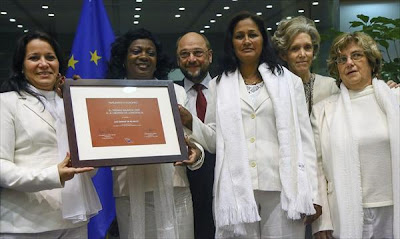 Cuba’s Ladies in White finally received their Sakharov prize Tuesday, in a ceremony delayed by Havana for eight years but described by the head of the European Parliament as proof that “no dictatorship in the world can stop democracy.”

“Our dignity is much bigger than the hatred of those who repress us,” Laura Labrada, daughter of the group’s late founder Laura Pollán, declared during the emotional session at the parliament’s headquarters in Brussels, Belgium.

The Ladies in White were awarded the Sakharov Prize for Freedom of Thought in 2005, but Cuban authorities did not allow them to travel to Brussels to pick it up. A change in Cuban travel rules in January meant they could finally travel to Europe.

Labrada, Ladies in White leader Berta Soler and member Belkis Cantillo walked onto the parliament floor dressed in the group’s traditional white clothing and with their right hands high in the air made the “L” of liberty with thumbs and index fingers.

Blanca Reyes, who represents the women’s group in Spain and picked up the 50,000-euro (now $65,000) prize money in 2005, also attended the European Parliament’s session, which was broadcast live by Radio and TV Marti.

Soler told a news conference before the ceremony that the European Union must keep up its tough policy on Cuba and maintain its “Common Position,” which ties any improvement in EU policies toward the island to Havana’s human rights record.

Although President Raúl Castro has launched some reforms, Cuba “lamentably continues to be the only Latin American country that does not tolerate any type of democratic opposition,” Parliament President Martin Schulz declared.

Remarks given by Martin Schulz, the President of the European Parliament, during the Sakharov Prize Award Ceremony for the Ladies in White (via Capitol Hill Cubans):

You are used to long marches. You are courageous and perseverant women. This march from Cuba to Brussels has taken quite a long time: more than seven years!

I am very happy that the day we can host you at the European Parliament has come.

Allow me to pay tribute through this ceremony to Laura Inès Pollan Toledo, co-founder and former President of the Damas de Blanco, who died in October 2011.

Dear Berta, ten years ago, when your husband, Angel Moya and Laura’s Husband, Hector Maseda Gutiérrez, were detained during the black Spring both of you  decided to protest peacefully against these arbitrary detentions. You were immediately joined by many wifes, sisters, mothers and daughters of activists. You marched and continue to do so every Sunday down Havana’s streets calling for the release of all political prisoners.

From that day, your peaceful struggle became the symbol of Cuban resistance for freedom and dignity.