The crown princess of Cuba, Mariela Castro, daughter of the island’s self-appointed king and supreme ruler, Raul Castro, will not be attending a LGBT conference in Philadelphia to receive an award for her gay rights activism. One would logically think the reason Princess Mariela suddenly became persona non grata at this gay conference was because the event organizers finally discovered how her father and uncle would round up gay Cubans on the island and put them in Nazi-style concentration camps. Or perhaps the event leaders in Philadelphia have discovered that the monarchical dictatorship run by Princess Mariela’s father continues to discriminate and repress members of Cuba’s LGBT community who refuse to submit themselves to the regime.

But alas, it is for none of these reasons that Cuba’s faux princess has been banned from attending this conference in Philadelphia. Instead, the U.S. State Department finally woke up and realized Mariela Castro is a high-level Cuban dictatorship official and has denied her permission to gallivant around the U.S. promoting the vile, repressive, and murderous regime of her father and uncle.

But as Capitol Hill Cubans points out, this has not stopped the corrupt and compromised journalists covering Cuba for the Associated Press from continuing their fallacious reporting:

Note to AP: Mariela Castro is a Cuban Regime Official

The AP has reported that Cuban dictator Raul Castro’s daughter, Mariela Castro, has been denied permission by the U.S. State Department to attend a conference in Philadelphia.

Kudos to the State Department.

But then it states, “Castro has no official link to the government aside from kinship.”

Mariela Castro — in addition to being one of the most cynical voices of the dictatorship, who outwardly defends repression against dissidents and the violation of the Cuban people’s fundamental human rights — was appointed by her totalitarian father to his rubber-stamp National Assembly of People’s Power. 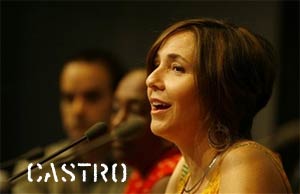