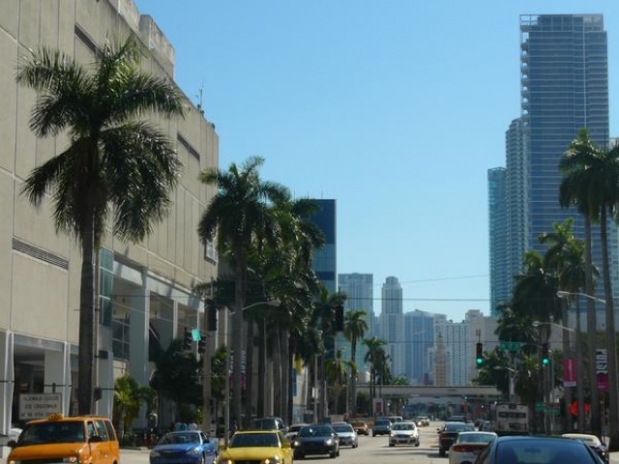 After decades of Made in Havana propaganda, I could travel that explosion of expressways called Miami (the entire city is an airport), where every little house is a clone of a Cuba lost forever (with their flags and little virgins), where every generation has at least one family representative, where the food remains as intact as a five-day-old, or five-decades-back memory, where dancing and laughing and even making love hurts us deep in the soul, where God speaks our exile slang perfectly. Because everyone in Miami is us, we live there or here: the city was built like a dream from which sooner rather than later the nation would wake up, a dream to conceal the nightmare of never returning home (Miami, mercy).

I entered and left Miami through the magic mirror of its radio and TV stations. It’s a miracle against modernity this hypermedia Miami, so homogenous and yet so plural. As banal as it is true-to-life. It could be a first impression, but after the despotism of Havana, where there are no longer any live programs (even the speeches of the Maximum Leader are broadcast with a few seconds delay, for protection), Miami simply amazed me. From sadness, but it amazed me.

With the mordant and lovable Jaime Bayly, with the precision to the point of causticity of Juan Manuel Cao, with the impassioned chorus of María Laria and her glitzy staff, with the eternal solidarity of Radio República and, of course, with the heart in the microphones of Radio Martí, the only broadcaster of the Cuban exile that transmits almost from the interior of the country (its studies are not in Havana but they have much of Havana and the other cities and towns of our country), with all and for the ratings of all I said the first thing that came to mind, without agendas dictated by any imaginary mafia of the Ministry of the Interior, without mutual fear nor mediocre censorship, without adding not even a line to what I have always said from my Cuban cellphone in my native Havana neighborhood.

We Cuban social activists agree that “to think and live in freedom is to learn thinking and living freely,” a phrase of Rosa María Payá’s at the University of Miami that electrified even the tears of this second capital of all Cubans (perhaps the first capitalism of all Cubans), where she and I coincided, each in transit to our own democratizing destination for our repressive country.

I resisted indulging my appetite in Miami, I have witnesses to my austerity. The food didn’t go down my throat: some kind of anguished happiness made me ignore my old acquaintances, living their successful lives in a Cuba that in Cuba we couldn’t even imagine (or we didn’t dare to imagine, and so delayed our respective exiles).

I saw the sea of Miami, but I didn’t look out on it nor want to smell it. I didn’t want to imagine the Island on the other side of the horizon, 45 minutes to where the Cuban political police wait for us to put us in quarantine without charges.

I felt the heat. They offered me a job, I didn’t answer. I slept on a sofa. I slept in a suite. I slept almost in a closet, at the edge of the probing looks of our civil society where I was a first-timer and happy. I remained sleepless in an airport of flights cancelled en masse by American Airlines, with the intuition that Miami had cast a spell on me to not let me leave.

Finally, I came, I saw, and I went, because Manhattan is less desperately Manhattavana, and because to vacate the subways is the secret formula of my subterranean Cuban-ness that flees Cubans because we all have within a mini-ministry of the interior. Everyone, starting with the pro-democrats.

I moved in the free cars of Facebook activists whom I didn’t know in person, but who from the beginning of the chats we already liked each other, beyond political or geographic positions. I spoke in the mythical Calle 8 Art and Research Center as if I was very sure about what I was saying, while my spirit was then a tissue of pure emotion. I flew to and from Miami thanks to the generous pockets of Cuban entrepreneurs who want Cuba more than me, people of diverse economic strata who treasure the archives and the illusions that dictatorial laziness derailed, destroying not only our rights as citizens but, with the same idea, a nation.

And this will be the most sinister, but also the most sincere legacy of Castroism or the Revolution: the day after is already humanly impossible. Our present precariousness is perennial. The elite in power have taken the necessary steps for a staged transition (and this includes my presence here: Miami, forgive me), where the peaceful dissidence inside and outside of Cuba will have no more space than the scaffold and, in fact, we are disappearing drop by drop and without witnesses of interest to the world, because the world is only interested in the millions and millions who now promote this neo-utopia that exploits capitalism without freedom. Businessmen of all countries, unite.

I spoke with personalities from Cuba’s republican history and about our most intimate and tense relationship with the government in Washington. I saw fewer homeless than in New York where, in turn, I saw fewer than in Central Havana, although this does not alleviate the humiliation of seeing myself flying to American universities while a human being sleeps on the sidewalks of this permissive country.

I want to return to Miami. I would not want to return ever again. I’m still about to leave. But very soon I will return. Miami, look at me: do you want to be my love, at least while Cuba doesn’t fall?