Imprisoned Cuban democracy activist, Luis Enrique Lozada, is on the 18th day of a hunger strike protesting his unjust detention by the Castro regime.

Lozada is a member of the Cuban Patriotic Union (UNPACU), which is led by Jose Daniel Ferrer.

He is not consuming food or water.

Tragically, Lozada is being held in the same isolation cell — and under the same inhumane conditions — as former political prisoner Wilman Villar Mendoza, another UNPACU activist who died from a similar hunger strike in January 2012.

Here is a picture of Lozada and his family before his imprisonment: 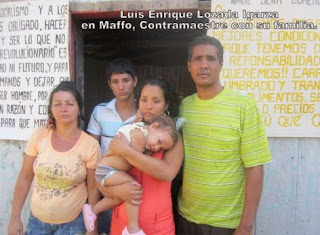