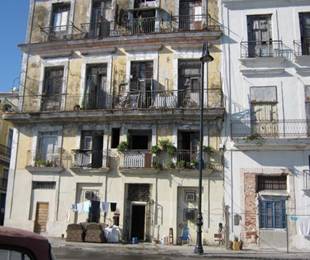 A month ago I wrote about the motto that will preside over the May Day celebration in Cuba: United for a Prosperous and Sustainable Socialism. I thought anyone with half a brain would realize the absurdity of that and would recommend replacing it with something more palatable.

This didn’t happy and today, a couple of days from the day, they are repeating that slogan to the point of exhaustion in the press and on radio and TV. It’s like fingernails on the chalkboard. Socialism never has been and never will be  prosperous and sustainable. Its global failure proves it. The motto seems more typical of capitalism, despite its crises and problems.

The motto and the slogan, which in this case is the same, I brought to mind some used in different years, when they wanted to mobilize the masses in pursuit of some task or goal. I remember “Humanism yes, communism no” (clearly they were hiding the ball), “Fidel this is your house” (political innocence), “Fidel and Khrushchev, we two together” (survived until the October Crisis).

Also, “The ORI (Integrated Revolutionary Organizations) is the fire, take care you don’t get burned” (pure sectarianism), “The ten million [tons of sugar harvested] achieved” (the harvest failed), “Convert the setback into a victory” (as a sequel to the prior one), “Armed struggle is the only way” (lasted until the triumph of the Popular Unity in Chile), and the most absurd of all, “Now we are going to build socialism” (after more than twenty years of sacrifice for it). The latter ranked first for a long time, until displaced by the current one.

In the world of advertising, when a slogan is developed for a campaign, that is as like the motto and the slogan, there is usually some random sampling from a certain number of people to determine if it sticks in people’s minds. Depending on the results obtained, it was used or not.

It seems that now the mottoes and slogans are made by one or a number of feverish minds, sitting behind their desks, believing that their ideas are shared worldwide. They forget that times have changed and with them the people as well. Even a cursory glance would prove otherwise, it is not so easy to actually fool most of the population.

Anyway, as I wrote then, the events on that date will be a success, both in the capital and in the provinces and municipalities. Cubans will come, not because they wish to do so or believe in what they do are doing but because they feel they must do so to avoid possible effects on their jobs, schooling, travel abroad, promotions and other scraps that depend on the state.

This situation has been repeated year after year, and if it shows anything, it is how much we still lack of having a civil society that is the driving force of the nation. Therefore, the mottoes and slogans are the least important and can be absolutely false and even virtual. They actually do not mobilize anyone: the instruments of mobilization are completely different.