Ebony Magazine is encouraging its readers to “do Cuba” like Beyonce and Jay-Z did Cuba when they vacationed there as VIP guests of the Castro dictatorship. In other words, Ebony Magazine is telling its readers to visit Cuba and ignore the apartheid regime that persecutes and oppresses black Cubans. They are encouraging their readers to enjoy the luxurious amenities the Castro dictatorship provides and operates through the use of slave labor. Ebony is endorsing an island getaway for their readers where they can party like Beyonce and Jay-Z while black Cuban dissidents such as Sonia Garro and black rappers such as Angel Yunier Remon Arzuaga are rotting in Cuban gulags because they are unruly black slaves who refuse to submit to their white slave masters in Havana.

In other words, Ebony is telling their readers they should in the literal sense do Cuba like the apartheid Castro dictatorship does Cuba. 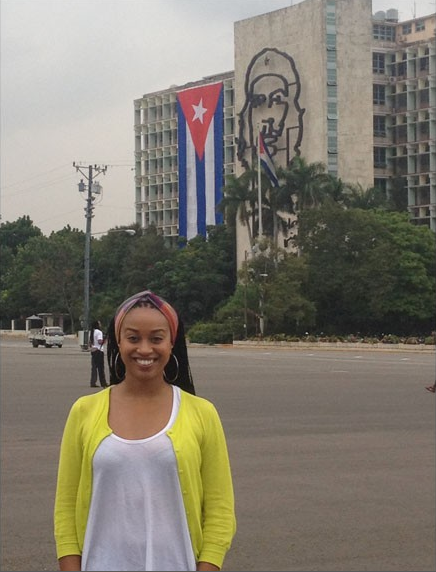 Revolution Square is a must-see destination if only to pose in front of the giant Che Guevara mural.

One of the most controversial vacation destinations, Cuba was once most closely associated with Fidel Castro and the 1963 U.S. embargo against the Communist country. But 50 years later, the Caribbean nation 90 miles off the coast of Florida is back in the news thanks to Jay-Z and Beyoncé’s recent anniversary vacation. The duo jetted down to the warm-weather isle to tour Havana, dine in the local paladars and explore historical sites.

Hop in a cab to visit the home of world-renowned artist José Fuster, known as the “Picasso of the Caribbean,” and have lunch in his wonderland of mosaic tile. Don’t forget to stop at the Plaza de la Revolucion to snap pictures in front of the huge Che Guevara mural before taking in the architectural beauty of the Gran Teatro de la Habana, where you might catch the famous ballet company rehearsing. Visit the Afro-Cuban community of Regla, where its church features a Black Virgin Mary. And be sure that you don’t depart the island without some good music, sangria and soul.

4 thoughts on “Ebony Magazine: ‘Do Cuba’ like Beyonce, Jay-Z, and Cuba’s apartheid dictatorship”