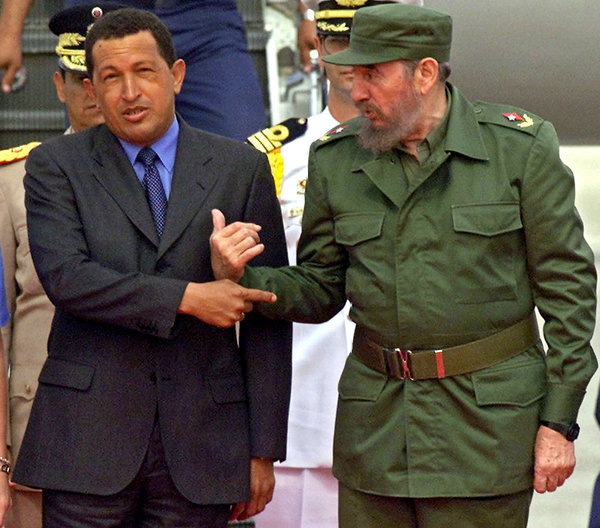 The French General Charles de Gaulle used to say that when two people or two countries associated with each other, one always tries to have the upper hand. Cuba, which because of its geographical situation is considered the Key of America, after 54 years of the exclusive mandate of the Castro brothers still has pretensions of being a lighthouse of redemption.

As the first Communist country on the continent it has forged the natural right to be an ideological mentor of the rebellious, seditious, or outdated Latin America anarchists.

The Havana government has outlined interventionist policies. When in the time of the “proletariat internationalism” the Soviet titty connected a tube of rubles, funds and oil, Fidel Castro offered guerrilla apprenticeship courses in Cuba.

Terrorists, such as the Venezuelan Carlos “The Jackal,” currently in prison in France, learned to use C-4 explosives from his Cuban comrades. On behalf of the dictatorship of the proletariat, an enraged poor island sent troops to civil conflicts in Africa.

After the years of the Castro hurricane are left behind, the amount of money and resources squandered in overseas battles will be known. When Soviet Communism said goodbye, the island entered a stage called the “Special Period”: a punishment of waste and economic unproductivity. The regime was jumping through hoops.

The State coffers were nearly empty. Lack of oil paralyzed the development plans. Closed industries. The blackouts lasted 12 hours a day. It was like a war, but without aerial bombardments.

In Venezuela, in 1992, a lieutenant colonel in the paratroopers attempted a military coup to install himself in Miraflores. Meanwhile, in his office, Fidel Castro circled in red pencil the news from the event. He awarded the highest priority to young Hugo Chavez. And when he was released in 1994, he was the guest of honor. It was in Havana where the future alliance was born.

The olive-green autocracy bet everything on a winning horse. Screaming, the homeland of Bolivar demanded changes. The corruption and inflexibility of traditional politicians, rampant poverty and urban crime, had gestated an explosive panorama.

Venezuela is a democracy in appearances. There is free press and political game. Even elections. But the strong man of Barinas designed a strategy that will enable staying in power for decades, using authoritarian methods subtly supported by the Constitution.

Chavez’s ideology was amorphous. Catholic, a little Marxism along the way, and a first class passion for the XXI Century Socialism devised by the German political scientist, Heinz Dieterich.

Death came to collect him and saved him from disaster. If Venezuela remains committed to the path of political absurdity, it will end in massive street protests, citizen discontent and social unrest. The economic figures are unsettling. Crime is frightening. Inflation soars.

Although the barrel of oil is around $100, the money collected evaporates. Oil production decreases. Part of this production is to pay their debt to China. Another part is delivered at a subsidized price, if paid for at all, to Cuba and other Caribbean nations.

Socialism sounds nice in theory. Helping the homeless, prosperity, health and free education. That is good. But social policies should be designed without violating individual liberties or leaping over democratic laws. A State can’t plan a whole economy from toothpicks to the exact amount of slushy ice.

President Nicolas Maduro could turn things around for good. But he’s carrying the burden of his friends’ cadaver on his back. The advice that blows down from Havana should not be a pattern to follow.

The project is to polarize society. To continue delivering oil to the string of friendly countries. And consolidate the continental hegemony against the United States. During his visit to Cuba he met with Fidel Castro for five hours, presumed mastermind of today’s Venezuelan landscape.

If Maduro is an honest man, he will notice that his alliance with the Cuban government could lead to political ruin. The ideal would be to break that heavy burden, which annoys even many supporters of Chavez.

And the model to follow, opting for a modern and moderate leftist style like Lula’s of Dilma’s in Brazil. Otherwise, its days are numbered.