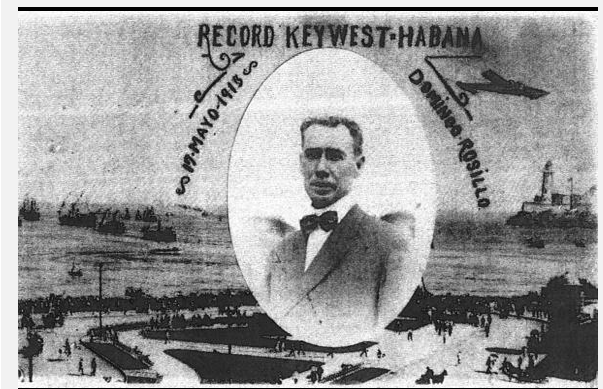 It was a time when aviation was in its earliest stages, when it took guts just get in a plane, let alone fly over 90 miles of open water.

But tempted by a competition with $10,000 in prize money, Domingo Rosillo del Toro steeled his courage on May 17, 1913 and took off from Key West to Cuba. He was accompanied by a monkey, handed to him at the last minute as a good luck charm.

While little is known about the monkey, the good luck part worked. Rosilllo flew two hours and eight minutes before landing his monoplane on a patch of grass near Havana. He was greeted by 50,000 Cubans and hailed as a hero.

Less than 10 years earlier, the Wright Brothers had made the first powered flight at Kitty Hawk, N.C. Rosillo’s act of daring made him the first pilot to fly from the United States to Cuba and set a world record for distance over water. It also made him first to deliver international air mail, when the mayor of Key West gave him some letters to take over.