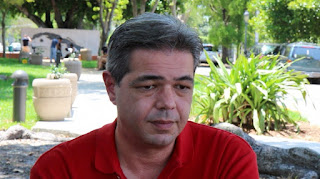 Babalú, touted as the world’s most popular Cuban-American blog in English, marks its 10th anniversary in June.

I spoke to the blog’s managing editor, Alberto de la Cruz, the other day in Miami as part of a series of interviews that I’m doing in South Florida, Washington and Havana.

Watch my interview with de la Cruz here or see transcript below:

Question: How do you see the democracy movement in Cuba?

And obviously if you really want to gauge how the democracy movement in Cuba has grown, one easy way to do that is to see reaction of the Castro regime. And the almost 7,000 arrests that took place just last year is I think an incredible indication that the Cuban government is worried about what’s going on with the dissidents. They’re worried about the opposition and they’re cracking down, and I think that is probably the best evidence there is that the opposition, that the democracy movement in Cuba, is growing exponentially.

Read the rest of the transcript HERE.