The Associated Press continues its policy of carrying water for the vile, murderous, and repressive Castro dictatorship in Cuba.

The AP’s Havana Bureau is “Out-of-Touch”

The AP‘s Havana bureau ran a story today about U.S. diplomat Conrad Tribble’s efforts to interact with some of the Castro regime’s official bloggers.

Of course, no story from the AP‘s Havana bureau is complete without taking a shot at Cuba’s courageous dissidents.

(And its apparent hope that U.S. diplomats are diverting their focus from supporting dissidents to “seducing” their harassers.)

“Washington is eager to reach a more diverse audience, as shown by a leaked U.S. diplomatic cable published in 2010 by WikiLeaks that described the small opposition as aging, ineffective, torn by infighting and hopelessly out of touch with most Cubans.”

Here’s the cable referred to in the AP‘s story.

Can someone pinpoint where it says that Cuba’s dissidents “are hopelessly out of touch”?

Let’s save you some time.

No, doesn’t use that term either.

These terms were courtesy of the sensationalist editing of the AP‘s Havana bureau, in order to keep its hosts (and biases) happy.

However, the cable does say that Cuba’s dissidents are “comparatively old” (not sure to whom) and that they lack “unity of purpose” (a ridiculous claim).

In this regards, the cable (written by former USINT principal, Jonathan Farrar) was plain wrong — and time has proven it.

In the last few months, the world has witnessed first-hand the young, united and dynamic faces of Cuba’s pro-democracy movement.

Do these people (picture below) seem old and lacking “unity of purpose” to you?

If anyone is old and out-of-touch, it’s the octogenarian Castro regime — and the AP‘s Havana reporting. 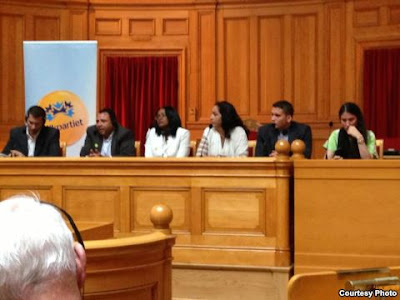